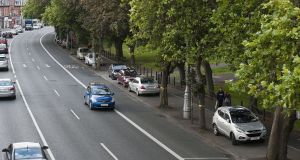 Trees lining the roadway at Fairview which had been earmarked for felling by Dublin City Council to make way for a cycle path. Photograph: Dave Meehan

Cars will be restricted to one lane on part of one of the busiest traffic routes running into Dublin city centre under plans for a new 2.5km cycle path costing €7 million.

Dublin City Council has approved the plans for a segregated cycle route from Clontarf to Amiens Street, providing a link to the Dublin Bay path that runs along the coast to Sutton.

However, in order to prevent the felling of historic trees along the route, councillors have agreed to restrict cars to one lane for a 300m section to make space for the cycle path.

The section of road is the inbound lane running in front of Fairview Park, from the junction of the Malahide Road to Merville Avenue – one of the worst traffic bottlenecks on the northside of the city.

“We have been told by the council’s engineers that this is the busiest carriageway in the the city, with three major roads the Howth Road, the Malahide Road and the Clontarf Road all converging – it’s at this point that traffic is going to be pinched down to one lane,” Independent councillor Damian O’Farrell said.

The traffic restriction was voted though by councillors without debate on Monday.

“I am in favour of the cycle route, but this is a very significant change, which will make an already bad traffic situation worse, and it was voted in without the public being able to make submissions, and without any discussion,” he said.

The cycle route was first proposed more than four years ago as an off-road track running in both directions on the east side of the road only. This would allow it to connect directly with the existing two-way off-road Dublin Bay cycle path.

However, in 2015, the council’s traffic department said a two-way path fully segregated from traffic would not be feasible because of the large number of side streets along the route. Instead, it drew up plans for paths on both sides of the road.

The paths would be “segregated cycle tracks where practicable” taking into account side roads and bus stops.

Detailed designs released for public consultation earlier this year indicated that would be removed in Fairview Park.

More than 15,000 people signed a petition at change.org seeking the retention of the trees, some of which were planted in 1908 by nationalist and unionist communities as part of international Arbour Day celebrations.

The council last August said it would amend its plans to save 42 of the trees. In the final scheme, which councillors voted on this week, the council said this would result in the removal of part of the traffic lane and “some additional queuing for traffic during the peak AM inbound commute”.

Deirdre Tobin, chair of the Clontarf Residents’ Association, said it had made a submission plan earlier this year, but had no opportunity to comment on the new traffic changes.

“This is completely new and not in the plans we made a submission on. Five lanes will be converging into one in the morning rush hours, which will create a terrible log jam.”