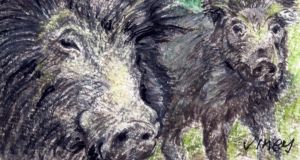 ‘Invasive alien species’: In at least 10 counties wild boar are to be shot on sight. Illustration: Michael Viney

Week after week, this column has dipped into the natural world, to celebrate the pleasure it has given me or to share my fascination with its myriad living forms.

It has monitored the impoverishment of Ireland’s natural environment, but mostly at a distance, through scientific studies of decline. At times, as in the overgrazing of the hills, I could offer outraged witness, but a new book makes me feel that too often I have settled for gazing seaward in a sad and passive misanthropy.

Pádraic Fogarty is anything but passive. A professional ecologist, having served as the revitalising chairman of the Irish Wildlife Trust he is now its campaigns leader. And he has produced an important, vividly written overview in Whittled Away: Ireland’s Vanishing Nature (€20 hardback, Collins Press).

Sector by sector, it charts the failure to value Ireland’s natural world. “I yearn,” Fogarty writes, “for politicians to talk about wildlife as though it was as important as health, education or roads.”

He starts with the sea and the Atlantic abundance of the past, and lists torrents of pilchards, herring and salmon, huge cod and giant skate. All this is part of a global recognition of loss. But Ireland’s Wildlife Act still, as he says, “goes out of its way to exclude marine fish and invertebrates from even being classified as ‘wildlife’ ”.

He looks to Norway, with its marine living-resources Act and bulging offshore nets, while Ireland’s nurturing inshore waters are still open to dredging, pair trawling and tangle nets. He describes the Irish Sea as an ecological ruin, its stocks of fish collapsed, leaving Nephrops prawns, their former prey, as the really profitable catch. He pleads for coastal marine-protection areas that mean what they say.

Exploring the national parks, he found “pretty places near the car parks, but beyond that things have mostly gone to rot”: turf cutting by machine in Glenveagh, in Co Donegal; invasive sheep and deer “killing off the woods” of Killarney, in Co Kerry; erosion leaving the Wicklow hills “degraded, neglected and increasingly abandoned”.

Diamond Hill, in the Connemara park, gave him stunning views of the mountains around, their sheep-shorn bareness “not a paradise lost” but “a paradise waiting to happen”. He calls for a new vision that starts with replanting the heather and the vanished oaks and pines of the uplands.

His review of the peatlands is equally bleak, as conservation is lost from a host of bogs once included among natural heritage areas. In the recent rows about turf cutting not once did he hear “any official defend the need for protecting a vanishing part of our heritage . . . They simply seemed to lack the vocabulary.”

In the Burren, by contrast, he finds “the best-managed landscape in Ireland”, its special, EU-funded incentives bringing farming and conservation together. This is what he urges for the whole of the marginal west, its cost a fraction of the government millions spent on existing environmental subsidies.

His picture of “vanishing nature” includes lists of some 115 extinct species, mostly garnered from the scientists’ Red Data books of lost and threatened plants, insects, birds, fish and mammals. They include some, but not all, of the species that Fogarty, along with other enthusiasts, would like to see brought into the “rewilding” of selected Irish landscapes.

Many are birds – crane, bittern, osprey, capercaillie – that everyone would welcome. But some are wild animals – wolf, wild boar, lynx – whose effects would need close management. Coexistence with farming could mean conflicts and budgets for paying compensation.

Rewilding is already ahead in Europe, where wolves, for example, now have breeding packs in Denmark, France and Norway. Ireland once had wolves – and wild boar, too, however they got here, and even, perhaps, from one fossil bone, the lynx.

Fogarty is quite a wild-boar fan – this while, from their illicit appearance in at least 10 counties, they are an “invasive alien species” to be shot on sight.

As with his detailed (and notably well-briefed) critique of policy on badgers, he finds proof of the boar’s potential harm, compared with its benefits to biodiversity, to be distinctly shaky.

Where should rewilding begin? Wild Nephin, the tangle of impossible, rhododendron-ridden forestry in northwest mayo set aside by Coillte as Ireland’s “first wilderness area”, offers a beginning. (Wolves and lynx, as Fogarty notes, are keen predators of deer and foxes.) The great forest of native woodland, Coill na hAbhann Móire, envisaged by the naturalist Cóilin MacLochlainn for the Avonmore river, in Co Wicklow, would take rather longer to mature.

Rewilding is, as he says, “a word that appeals as much to the soul as it does to the mind”. Soul also gets rather short shrift, perhaps, in the Department of Arts, Heritage, Regional, Rural and Gaeltacht Affairs.