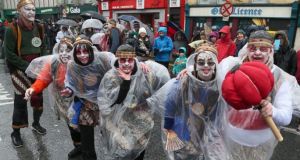 Performers add a dash of colour in the rain during this year’s St Patrick’s Day Parade in Galway city. Photograph: Joe O’Shaughnessy

Parts of the country experienced the wettest March since records during a wild, mild and wet month, according to the latest Met Éireann weather statistics.

Both Shannon Airport recorded its wettest March on record since the station opened in 1946 with 32.4 mm of rain on March 3rd, while Dublin and Mayo recorded their wettest March in nine years.

Rainfall in almost all areas of the State was above average for this time of year.

While March was a particularly wet month it was also warmer than usual with nearly all stations across the country reporting it as the mildest March in five years.

Saturday, March 25th was the warmest day across the State, with the highest temperature at Newport, Co Mayo recorded at 19.2 degrees Celsius.

This warm weather was a result of an anticyclone which brought ample sunshine across most counties and higher temperatures in the latter part of the month.

Knock Airport in Co Mayo reported a monthly total of 113.5 hours of sunshine. This is Knock’s highest level of sun for the month in seven years while the highest number of daily sunshine hours was recorded at Belmullet in Co Mayo on March 25th.

The lowest air temperature was -3 degrees in Co Sligo while Athenry in Co Galway and Co Carlow has the highest number of cold days, with 16 days of ground frost.

The number of overcast days in March ranged from five at Malin head in Co Donegal to 12 at Valentia Observatory in Co kerry.

Sherkin Island in West Cork reported its highest March wind gust in nine years on the 5th with a speed of 111 km/h. The month’s highest 10-minute mean wind speed was recorded at Mace Head in Co Galway on March 2nd at 45 knots.

This week’s dry and sunny weather is expected to continue into the coming days with just a few light showers affecting northern counties on Wednesday.

Conditions are expected to remain dry and settled through to Sunday but temperatures will remain cool with a mix of cloud and sunny spells.