Dublin skyline: Why set such high limit if area is unsuitable? 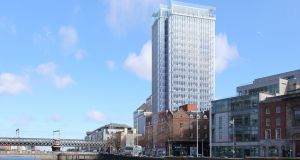 Artist’s impression of the proposed 88m skyscraper on Tara Street: Johnny Ronan sought the maximum height permitted and the planners turned him down.

Few applications for large-scale developments, in either the housing or commercial sector, make it past the Dublin city planners on the first go.

Most heavy hitters will expect to receive a “further information request” from the council some time after they submit their plans.

The term is a misnomer. The planners are not really seeking further information – they are telling the applicant what parts of the proposal they do not like and advising them to reassess their ambitions.

It’s not really a request either; fail to change the application in line with the planners’ advice and it is extremely unlikely a brick of that office block or housing estate will be laid.

It’s all part of the horse-trading of the planning process. The developer looks at what is the maximum permissible height, or the minimum permissible room size, under the city or local development plan, and goes for broke. The planner comes back and tells them to catch themselves on, changes are submitted, and a compromise is reached.

That’s generally not the end of the road. If the planners are minded to grant permission, they may attach conditions further altering the development. Large-scale schemes are also most likely to be appealed to An Bord Pleanála, which may, if it grants permission, impose additional conditions.

Not even State organisations are immune from this process, as seen in the application from the Office of Public Works (OPW) for the demolition and redevelopment of Hawkins House in Dublin’s city centre. No one was going to go chaining themselves to this 1960s monstrosity to save it from the wrecking ball, and pretty much anything that would go in its place (within the parameters of the area’s planning rules) would be preferable in the eyes of most.

However, the OPW’s scheme submitted in June of last year, which fit in with the parameters of the George’s Quay local area plan, still went through the further information process, and was appealed to the board, before finally getting the go-ahead last month.

Just around the corner on Tara Street, there was no such drawn-out process for developer Johnny Ronan. He sought the maximum height of 88m permitted under the George’s Quay plan, and the planners took one look and turned him down.

This would seem to indicate that, despite the council having legislated for a building of this size, on this specific site, the planners saw nothing in this proposal that could be amended, by way of a reduction in height, or any other revision to make it acceptable.

The 22-storey building, because of its “scale, bulk and height” would have had a detrimental impact on pretty much everywhere in the historic core of city within a radius of more than a kilometre, but particularly its nearest neighbours, the Custom House, the river Liffey, O’Connell Street, Trinity College and College Green, the planners said.

And, given that no reduction in height was sought, the immediate proximity of important historic features, and the wide geographical range of the potential detrimental effect, it is fair to assume that a 5m, or perhaps even a 10m or 20m reduction would not have got it under the wire.

Which begs the question: why put in place a local area plan that allows buildings up to 88m tall, if this site is so wholly unsuitable for a skyscraper?