Locals blame Poolbeg incinerator for infestation in Sandymount and Ringsend 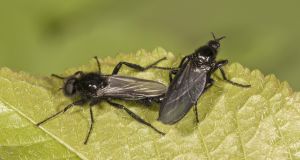 A plague of flies of ‘biblical proportions’ has descended upon the south Dublin suburbs of Sandymount, Ringsend and Irishtown. File photograph: Hans Lang/Getty

A plague of flies of “biblical proportions” has descended upon the Dublin 4 suburbs of Sandymount, Ringsend and Irishtown, according to residents and local businesspeople.

Labour Senator Kevin Humphreys said he had received “hundreds” of complaints from locals in recent days over the fly infestation, which has forced people to keep their windows shut and resulted in the closure of some businesses.

Tony “Deke” McDonald, who runs Deke’s Diner at the Sean Moore Road roundabout in Ringsend, said the infestation was the worst he had ever seen.

“It started around four or five days ago with a swarm of biblical proportions. People would be used to flies in the summer, but I’ve been running the diner 17 years next week, and I’m 30 odd years in the area, and I’ve never seen the like of it. There [were] hundreds of them.”

The flies appeared to be larger than the normal house flies, Mr McDonald said.

“These are not like ordinary house flies. They wouldn’t be as big as a bluebottle but they’re big and they seem more resistant to fly-spray.”

Establishing the source of the fly larvae was the only way to end the infestation, he said.

“I have no axe to grind, and I know it’s very easy to jump on the [Poolbeg] incinerator, but there wasn’t this problem before it started taking rubbish.”

However, a spokesman for Covanta, the company which runs the incinerator, said it was not the source of the problem. “There are no waste deliveries to the plant at the present time.”

Irishtown resident Carol Dunne-Boyne said she initially thought a mouse had died in her house, such was the volume of flies in her home.

“We went pulling out everything in the kitchen and the rest of the house, thinking something had died, but there was nothing. There were dozens of dead flies on the window ledge, flies crawling up the walls .

“Then I talked to my sister who lives opposite the [Irish] Glass Bottle site, and my neighbours, and they said the same. You can’t get a tin of fly-spray in the area for love nor money.”

The Poolbeg Yacht Club was forced to close its kitchen last Sunday and hire exterminators as a result of the fly problem.

“It was so bad on Sunday that we couldn’t serve food; you couldn’t even work in the kitchen there was such a swarm of flies. It was terrible, but it was like that in the whole area,” a manager said.

Mr Humphreys has asked Dublin City Council to investigate the source of the problem.

“I have received hundreds of complaints and it’s not only disturbing residents, it’s closing small businesses. The council needs to establish if the source is the sewage works, algae on the beach, or if it is the incinerator.”

A spokesman for the council said it had conducted some preliminary investigations but could not link the problem to any particular activity.

“It may be down to the current weather conditions.”