Gusts of between 110 to 130km/h are expected, with a risk of coastal damage 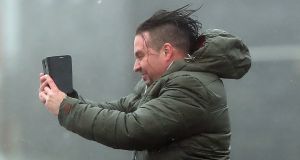 A man takes a selfie on the west coast during Storm Ophelia. Gusts of a similar speed are expected tomorrow. File photograph: Niall Carson/PA Wire

A status orange wind warning has been issued for two counties on Friday, with gusts of between 110 to 130km/h expected.

The status orange warning is in place for counties Mayo and Donegal from 1am to 8am on Friday, with both counties set to experience winds of between 65 to 80km/h.

Met Éireann said the warning pertains to coastal regions and high ground in these areas, with a risk of coastal damage in the northwest during the period due to a combination of winds, high spring tides and high storm surge.

The forecaster has also issued a status yellow wind warning for Connacht and counties Cavan, Clare, Kerry and Limerick.

This warning will be in place from 10pm on Thursday to midday on Friday. Wind speeds of between 55 to 65km/h and gusts of between 90 to 110km/h can be expected in these areas during this period.

Met Éireann said that rain will become widespread across the country early on Thursday night, before scattered heavy showers, with a risk of hail and thunder, follow in from the west. Minimum temperatures overnight will be between 3 and 6 degrees Celsius.

In general, Friday will be cold, blustery and showery, with a risk of hail and thunder. There will be fresh to strong winds earlier on Friday, which will strengthen to gale force later in the day.

An Garda Síochána has warned drivers, especially those on the west coast, to be careful on the roads this weekend.