Department of Finance report warns about dangers of concentrations of ownership 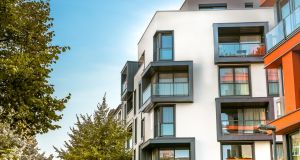 The report also finds that the build-to-rent sector tends to supply apartments to the premium end of the market “unsuitable for people on average incomes”. Photograph: iStock

The influx of large private landlords into Ireland has raised the risk of investors developing “monopolistic or oligopolistic pricing power” in rent-setting, especially in densely populated city centres, according to a newly published report.

The report, compiled by the economics division of the Department of Finance it says institutional landlords, who own in some instances hundreds of apartments or houses, remain a small but growing segment of the Irish rental market, holding 4.6 per cent of all tenancies nationally.

However, its research found that ownership – particularly of apartments – by such landlords may be significantly more concentrated in some areas, especially in the city centre in Dublin.

While the analysis does not find that price-setting is already occurring, it does flag “a risk that at a sufficient scale an institutional investor or group of investors could, over time, develop monopolistic or oligopolistic pricing power”.

Until now, the nature of the Irish rental market, which has been dominated by small buy-to-let landlords, has limited the risk of this occurring, but the research argues that “price-setting power could be attained at a local level given certain conditions and sufficient scale”.

The research analysed the number of apartment tenancies controlled by companies in areas of Dublin known as “electoral divisions”, one of the smallest units of geographical measurement used by planners.

It found that in some areas of Dublin, significant numbers of apartment tenancies were owned by companies. In Chapelizod, the percentage of the apartment stock rented out by a company was 52 per cent, while in Tallaght-Springfield, it was 40 per cent.

The report finds that while the impact of institutional investors in the national property market is marginal, “such companies have a disproportionate impact in the market for apartments, particularly new apartments”.

The paper also finds that there are many positive aspects to institutional investment into the Irish property market. Institutional investors are delivering dense, centrally located accommodation that is much desired by employees in the foreign direct investment and ICT sector.

According to the report, “market participants have indicated to the Department of Finance that the lack of such accommodation is acting as a restraint on further job creation in these sectors”. The research finds that the type of housing provided by institutional investors “is more closely aligned to the needs of such workforces” as well as to broader changes in household size.

“At a national level, or in terms of the broader Dublin market, the advantages of institutional investment are manifold, broad-based and beginning to yield positive outcomes for the Irish housing system.”

It finds that there is a build-to-rent model in Ireland, where entire blocks of apartments are funded by institutional investors with the intention of putting them on the rental market. There is emerging evidence that “such investors are the driving force behind a significant increase in the supply of new apartments in Dublin”. It also argues that institutional investment “provides an opportunity to professionalise the sector, to realise economies of scale, and to improve regulatory and taxation compliance standards”.

The report flags other risks or concerns alongside the risk of pricing power. It finds that the build-to-rent sector tends to supply apartments to the premium end of the market “unsuitable for people on average incomes”. “There is a risk that, should [buy-to-rent] investment continue at current growth rates, market forces would over the long term create socio-economic polarisation in some urban areas”.

“Under such a scenario, average income earners would be priced out of purchasing or renting from the private market, while local authorities would continue to provide housing for people on low incomes,” the report states.

It also flags the impact of new trends emerging around property ownership, as rates in Ireland decline and people move towards a longer-term rental model. “At a local level, this may lead to areas almost entirely owner-occupied, or entirely rental.” It says the State has the power, through direct interventions or the planning system, to introduce an element of “tenure planning”.

It also calls on policy makers to “consider the long-term implications of a shift in tenure profile”, as welfare provision for older people “implicitly pre-supposes home ownership at retirement age”.

“The fiscal implications of a change to this assumption are considerable,” the report concludes.