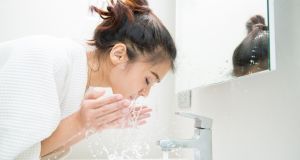 Irish Cosmetics, Detergents and Allied Products Association director Siobhán Dean said use of synthetic, solid plastic particles in exfoliating and cleansing products that were non-biodegradable would be phased out by 2020. Photograph: Getty Images

New research from Irish scientists confirms minute pieces of plastic are pervasive in Irish freshwater and marine ecosystems, and have been detected in sediments and species.

Scientists from Galway-Mayo Institute of Technology and NUI Galway, on Tuesday welcomed Government moves to ban plastic microbeads, though they questioned if it would be sufficient to remove all polluting plastics from such environments.

They were appearing before the Oireachtas Committee on Housing, Planning and Local Government.

The committee is undertaking pre-legislative scrutiny of the 2018 Plastics Microbeads Bill which seeks to restrict the manufacture, import, export or sale of certain products containing microbeads – tiny spheres of plastic found in shower gels, face-scrubs and toothpaste that persist for hundreds of years in the environment.

Dr Anne-Marie Mahon of GMIT said the main sources of microbeads included industry, landfills, stormwater drains, and run-off from washing machines. While water treatment systems had “a capture rate of 90 per cent – the remaining 10 per cent was not a low quantity, given the extent of microbeads ending up in rivers and lakes.

She confirmed all samples and invertebrate species taken from the River Slaney catchment were found to contain microbeads. Their impact on human health and the environment, however, was not known.

While beach clean-ups were effective in reducing larger plastic items, Dr Mahon said she would like to see intervention at an earlier stage by changing product design; better industry practices, upgrading of treatment plants and improvements to wastewater sludges applied to land.

Her colleague Dr Róisín Nash said microbeads were equally pervasive in estuaries and the marine environment and had been found in seabirds in Galway Bay.

Dr Kevin Lynch of NUIG said the problem was that microbeads looked like food to organisms, and then became concentrated and moved up the foodchain as predators consumed smaller species.

In light of such evidence, he believed the Government was correct in invoking the precautionary principle in acting now through passing legislation.

In response to Green Party Senator Grace O’Sullivan, who asked if the Bill went far enough, Dr Lynch said it did not address “secondary microbeads” such as microfibres from clothing and larger plastic items. “That is something for another day,” he added.

Irish Cosmetics, Detergents and Allied Products Association director Siobhán Dean said use of synthetic, solid plastic particles in exfoliating and cleansing products that were non-biodegradable would be phased out by 2020.

This action was an acknowledgment of public concern, though these products were not the main source of such pollutants. By far the largest potential contributors to microplastic marine litter were from the breakdown of bigger plastics, such as car tyres, plastic pellets and microfibres from clothes, she added.

Detergents and maintenance products were not identified as key contributors to marine plastic litter. “Any proposed ban of microbeads in detergents and rinse-off personal care products must be supported by clear definitions to operate effectively.”

The definition of microbeads in the Bill was too broad and as a result would prevent Irish manufacturers manufacturing “rinse off cosmetics” and detergent products that otherwise would be permitted in other EU countries, Ms Dean warned.

John Chave director general of Cosmetics Europe, which represents more than 4,500 companies, said the EU was acting with urgency on the issue but would not have the over-riding legislation in place until 2021.

While he acknowledged the Government’s wish to introduce national legislation, it was essential for the smooth functioning of the European single market, not to create regulatory barriers to trade. The Bill should be modelled on the UK approach to avoid disadvantaging Irish manufacturing industry, he said.