What’s this bird I spotted from a distance? Readers’ nature queries 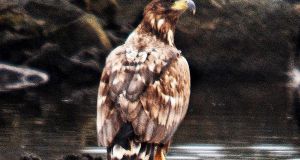 I spotted this enormous bird from a distance. Could it be an eagle? – Emer O’Shea, Ballyshannon, Co Donegal
Yes, it could be a young golden eagle.

This large spider turned up in our log pile. I hope he’s a native rather than a foreign biter. – Diarmaid Ó Gráda, Clonskeagh, Dublin 14
It is one of the false widow spiders found here, Steatoda bipunctata. And yes, it has a bite.

What on earth is this, which I found on Bunduff Strand – a jelly of some kind? Individuals are between 3 and 4 inches long, and it has a central body, greyish in colour. – Andrea McElroy, Mullaghmore, Co Sligo
It is snakelocks anemone, Anemonia viridis. It comes in different colours, some brown or grey or green, and is found from the lower shore down to deep water.

What are these plants growing on a moss-covered tree in Lough Key Forest Park? – Ted Sheehy, Elphin, Co Roscommon
They are navelwort. Later on they will grow long spikes of flowers. They more usually grow on walls or cliffs or rocky places.

I saw these unusual ducks in the Phoenix Park near the pond at Mountjoy Cross.– Pat Smith, Drumcondra, Dublin 9
They are muscovy ducks, which originated in Central and South America and were brought to these islands more than 100 years ago.

The cold weather has brought some redpolls to the garden to feed on the nyger seeds for the first time this year. – Liam Kane, Blanchardstown, Dublin 15
There’s been an influx of redpolls from the continent