Human activity could see 40% of insect species wiped out in decades, study finds 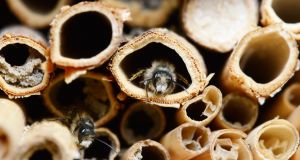 Insects ranging from butterflies and bees to dung beetles were among the most affected. Photograph: iStock

Human activity is causing dramatic declines in insects which could see 40 per cent of species become extinct in a few decades, a scientific study has warned.

The global review of declines in insects warned that the world was witnessing the “largest extinction event on Earth” for millions of years, in the face of habitat loss, pesticides, disease and invasive species and climate change.

Because of the importance of insects to natural systems and other wildlife, “such events cannot be ignored and should prompt decisive action to avert a catastrophic collapse of nature’s ecosystems”, the scientists warned.

The review, published in the journal Biological Conservation, looked at 73 historical reports on insects from around the world, including studies in the UK, and found insects ranging from butterflies and bees to dung beetles were among the most affected.

Declines were not just hitting specialist species, for example those which rely on a particular host plant or only live in specific habitats, but also much more “generalist” species.

The researchers warned that the intensification of agriculture over the past six decades was “the root cause of the problem” and that the relentless and widespread use of pesticides was having a major impact.

The biggest driver in insect declines is the loss of habitat and conversion of land to intensive farming and urban areas, followed by pollution, mainly by chemical pesticides and fertilisers.

Insects are also being hit by biological factors, such as pathogens and introduced species, and by climate change, where rising temperatures could affect the range of places where they can live.

Insects are key to functioning natural systems, from providing a food source for other wildlife such as birds, mammals and amphibians, to pollinating plants and recycling nutrients.

The researchers, Francisco Sanchez-Bayo and Kris Wyckhuys, said: “The conclusion is clear: unless we change our ways of producing food, insects as a whole will go down the path of extinction in a few decades.

“The repercussions this will have for the planet’s ecosystems are catastrophic to say the least, as insects are at the structural and functional base of many of the world’s ecosystems since their rise at the end of the Devonian period, almost 400 million years ago.”

They called for habitat restoration, a dramatic reduction in pesticides and changes to agriculture to help insects, such as flower-rich strips planted along the margins of fields, or rotating crops with clover to benefit bumblebees.

Matt Shardlow, chief executive of wildlife charity Buglife, said: “It is gravely sobering to see this collation of evidence that demonstrates the pitiful state of the world’s insect populations.

“It’s not just about bees, or even about pollination and feeding ourselves, the declines also include dung beetles that recycle waste and insects like dragonflies that start life in rivers and ponds.

“It is becoming increasingly obvious our planet’s ecology is breaking and there is a need for an intense and global effort to halt and reverse these dreadful trends — allowing the slow eradication of insect life to continue is not a rational option.”

He said insects made up more than half the species on Earth, but the research showed they were disappearing much faster than birds and mammals.

“There is not a single cause, but the evidence is clear, to halt this crisis we must urgently reverse habitat fragmentation, prevent and mitigate climate change, clean up polluted waters and replace pesticide dependency with more sustainable, ecologically-sensitive farming,” he urged.–PA