British nuclear waste facility could be located near Newry 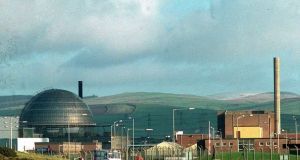 Nuclear waste is stored at about 30 sites across Britain, but predominantly at ground level at the Sellafield reprocessing plant in Cumbria. Photograph: PA

The Border town of Newry is being considered as a location to dispose of the United Kingdom’s nuclear waste, with research identifying the area as potentially suitable for an underground disposal facility.

It is one of five sites in Northern Ireland under consideration as possible stores for the waste and among 45 being examined across the UK as whole.

An area of granite bedrock near Newry may be suitable for a geological disposal facility (GDF), according to a recent preliminary report by Radioactive Waste Management (RWM), a UK State-owned company.

The area of rock stretches from Slieve Gullion to the Mourne mountains. Geological disposal sites hold radioactive waste hundreds of metres underground, and there are no current facilities in Northern Ireland.

Future policy decisions on nuclear disposal in Northern Ireland rest with the Stormont executive, where power-sharing has been collapsed for more than two years.

The British government’s current preference is that one facility would service the entire UK, a spokesman for RWM has said. Any future facility would need the support of the local community before it could be approved.

Nuclear waste is stored at about 30 sites across Britain, but predominantly at ground level at the Sellafield reprocessing plant in Cumbria.

“There are granites and similar strong rocks around Newry, in which we may be able to site a GDF,” the recent RWM report said. “We would need to do more work to find out whether these rocks have suitable properties and thicknesses in the depth range of interest for a GDF.”

Preliminary reports into other regions of Northern Ireland found a section of strong rock between Omagh and Cookstown, Co Tyrone, which might support a similar facility.

A number of areas in the north of the country could also possibly be suitable, researchers found. These included one location between Belfast and Larne, areas around Coleraine, Co Derry, and Ballymoney and Ballycastle, in Co Antrim.

On Monday, an emergency motion was passed at the Newry, Mourne and Down District Council, unanimously opposing locating any nuclear waste facility in the local area.

Some 45 preliminary regional reports had been completed across the UK, assessing what locations might have suitable rock types to build a facility.

The reports began a process that could take 10 to 15 years to identify a suitable area, gain the consent of a local community and build the facility, the RWM spokesman said.

There was a “false narrative” that nuclear waste disposal facilities would be forced on communities, he said.

Responding to the Newry report, Sinn Féin MP for South Down Chris Hazzard said Britain could not be allowed to use the North “as a dumping ground” for its hazardous and toxic waste.

“Not only would this have dire consequences for our environment but it would also pose a serious health risk to the population,” he said.

He said the probability of any plan being approved was “extremely remote”. It was important politicians on both sides of the Border were not “asleep on the issue,” but equally that local representatives did not engage in “scaremongering,” he said.