Tussles for mussels: A species under threat in the Doo Lough valley 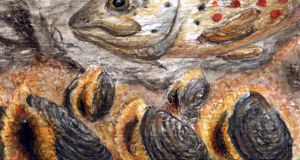 Across the mountain, the wilder road to Galway twists through the bogs of Doo Lough Pass, skims the shores of two dark lakes and swerves through the old stone bridge that spans the Bundorragha river.

On its short, swift run down to the fiord of Killary harbour, the river is an idyllic salmon stream, with riffs and rock weirs and deep, swirling pools. In summer rains, upmarket anglers in wet-weather gear cast blissfully across the spate.

Along with the passage of salmon and sea trout to the lakes below Delphi Lodge, the beds of Bundorragha’s pools are home to some of the largest and healthiest colonies of the freshwater pearl mussel, Margaritifera, in Ireland.

Fewer than 30 of our rivers now possess this beautiful mollusc, its black shells lined with gleaming nacre, violet and blue. And only a handful are breeding young to support this invertebrate’s remarkable lifespan of a century and more, scantily nourished on a flow of organic particles.

In early autumn the female mussels release clouds of larvae called glochidia. Whirling downstream on the way to the sea, each microscopic larva has a matter of hours in which to be breathed into the gills of a swimming salmon or trout.

Of some 10 million larvae per mussel, perhaps 40 find a host. Of those, perhaps two will hang on long enough (a couple of weeks), absorbing food from the gill tissue, to grow into viable but still minute shelled mussels.

They then fall off the fish and burrow into sand or gravel, where they live for some five years, feeding on bacteria. It takes this long for them to grow enough to withstand the tug of water in flash floods and the shifting of stones at the surface of the river bed. For this they need a flow of well-oxygenated water, free of smothering silt.

The chief historical threat to the mussels was trade in their pearls though only perhaps one in 100, invaded by a parasitic fluke, seals it in layers of nacre. Huge numbers of mussels were sacrificed for a single saleable pearl, a pillage long outlawed in both islands but still rarely attempted.

Locations of the mussel rivers were once a semi-official secret. But the trade has faded and its transient damage has been overtaken by modern fertiliser pollution and the flow of silt from upland forestry and overgrazed hillsides. Research, rural awareness and protection for the species have become the new priorities.

Nineteen river catchments with the mussel have long been designated Special Areas of Conservation by the National Parks and Wildlife Service. But progress into actual management plans has been slow – a failure that this month brought threat of court action from the European Commission.

Such threats are now quite familiar to Ireland and many other countries slow to fulfil the EU nature directives. The controls available to Irish conservation have also had to deal with constitutional protection of property rights and its impact on law and regulation.

More active solutions have now been sought in agri-environmental schemes that embody local leadership and are backed by payments for ecological results. Among them is the multi-agency Pearl Mussel Project, which has been running for five years with a budget of €10 million.

If it succeeds, local farmers, researchers and advisers will collaborate to secure the mussels’ future in eight priority catchment areas in the west of Ireland. Bundorragha is among the first consultation meetings, and some 140 active sheep farmers are being asked to meet with the Pearl Mussel Project team at Glen Keen Farm on December 4th.

The long valley between Mweelrea and the Sheeffrys has some of the highest rainfall in Ireland, with silvery hillside cascades in every heavy downpour. While the lakes that feed the river can seem notably clear to anglers, the deeper flow of peat silt is a long-term hazard to Margaritifera.

These mountains were once severely overgrazed, but nothing in the new project proposes further limits to flocks. Its object is “maintaining natural habitats” and “farmers will be afforded flexibility to manage their lands in a way that achieves the best environmental result” (pearlmusselproject.ie/farm-scheme).

One small new measure is being trialled in Co Kerry, where the separate KerryLife Project, part-funded by the EU, works with farmers in the Caragh and Blackwater catchments. Fabric fences that let water through but hold back silt are meant to reduce run-off from farm roads and tracks into the rivers.

In the Doo Lough valley, however, natural forces are at their fiercest, and climate change already brings stronger storms and heavier rain to tear at mountainsides and bogs.

The valley’s farmers are a hardy, resourceful lot. If it’s worth their while, they’ll think of things to do – or not, as the case may be.