What should we do with this insect from Taiwan? Readers’ nature queries 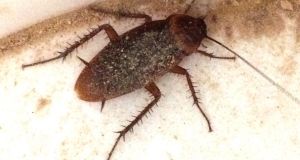 We got a shipment in from Taiwan and this insect was in it. What should we do with it? – Catherine Flaherty, Kilbeggan, Co Westmeath
It looks like one of the cockroaches. Destroy it.

My daughter Astrid and I found these two ladybirds in the back garden of her grandparents’ house in Donnybrook. – Shane Kenny, Donnybrook, Dublin 4
They are the invasive, alien harlequin ladybirds which were brought in to this country with imported plants. Remove them and keep an eye out for more.

We find lots of shells on Mullaghmore beach, but this complete guy with foot extended was washed up with seaweed after a rough sea. Is it edible?
Andrea McElroy Mullaghmore, Co Sligo
It’s an otter shellfish, which will grow even bigger, and they are edible.

I saw a pair of choughs outside my gate demolishing a snail. I identified them from my bird book. Are they common here in the west? – Geraldine Molloy, Dooega, Achill Island
The red-billed crow, the chough, is common along the west and south coasts, and around the cliffs of Achill. Minaun cliffs are north of you and Ashleam cliffs to the south.

Ruth Houston, Newtownards, Co Down, sent by post a small dead fly which bit her. It was a female black fly drawing blood to make her eggs. They can be a great nuisance to cows and horses and also attack people.

Correction : This moth sent by Jack Casey, Cork (Eye November 10th) is the linden bark borer, Chrysoclista linneella, a very rare moth, only one of which has been seen in Ireland.

Bus Éireann to shut many inter-city routes due to financial pressures 15:23
Northern Ireland reports 220 new cases of Covid-19 14:54
Gardaí want to talk to three males over alleged rape in Mayo 13:58
Substantial increase in overseas travel last month 13:48
Coronavirus cases rise in most counties but rate of increase is slowing 13:39