Great tits: What a study tells us about their personalities 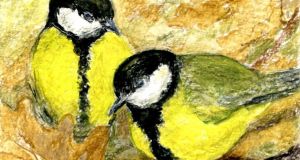 For some weeks it seemed that the acre had lost nearly all its birds. One or two loyal blackbirds screeched from beneath my feet and the odd wren still rocketed from bush to bush. The oaths from a passing raven echoed from an empty sky.

Peanuts for Halloween were, of course, the answer. With so many berries on hawthorn hedge and rambler rose and so many spires of seeding weeds, we do not rush in autumn to gluttonise the birds. But a couple of feeders swinging in the wind had customers in half an hour.

Goldfinches were first, mob-handed, conjured from nowhere like a magician’s bright silk handkerchiefs. And then, until the finches ganged up on them, a pair of great tits, one at either side.

That, as it happened, was also a bit of sudden magic – to be reading reams of stuff about Parus major on the computer and then, having missed them for so long, to glance past the screen and find them there in person.

Fond as I have been of the great tit, and welcoming its squeaky bicycle pump, as a confirmation of spring, it had never occurred to me to wonder about its personality. The corvids have personality – magpies teasing dogs, ravens solving puzzles, New Caledonian crows crafting tools, choughs weaving dances in the air. But tits?

That was to reckon without the questing mind of science. It has decided that, to take a random definition, “individual animals differ in the way they cope with challenges in their environment, comparable with variation in human personalities”. And since the personality traits are linked to genes, how they survive in natural populations can offers lessons for evolution.

When behavioural ecologists turned to birds, they looked for species with the best potential for long-term study. At the University of Oxford, already a leading centre of ornithology, the common great and blue tits ticked all the research boxes. They were happy to nest in the wooden ones, prolifically and at high density, without travelling too far or objecting to being monitored by scientists.

Oxford also had Wytham Woods just a few kilometres away, a “laboratory with leaves” bequeathed to the university in 1942. For more than half a century, the entire 358 hectares of the old broadleaf woodland have held some 1,000 nest boxes. This has allowed individual marking of bird parents and offspring, spanning up to 40 generations, in one of the longest-running ecological studies in the world.

The study of great tit personality is relatively new. Its developing research has prompted parallel experiments in the Netherlands and at University College Cork, where it is led by Dr John Quinn, a behavioural ecologist who worked for four years with the great tits of Wytham Woods. As a professor of zoology at UCC, he has been setting up studies on the birds that nest among fragments of woodland along Co Cork’s Bandon valley.

While this has yet to mature into academic papers, the results from Quinn’s teamwork at Wytham Woods are already putting shape on great tit personality.

The latest study, Personality Shapes Pair Bonding in a Wild Bird Social System, just published in Nature Ecology & Evolution, shows that bolder, more proactive males choose their partners sooner in winter and pay them more attention before breeding in spring begins. Shy males are less devoted to forming a strong pair bond and spend more of their time flocking with other females.

Microchipped for identity and tracked by radio, it was possible to pick out the ones that stuck together in winter flocks. They were then given a personality test to see how “bold” they were in exploring new environments.

A recent Dutch study describes a typical test, with great tits captured in the field outside the breeding season, using mist nests or retrieval from roosts. They were kept for a night in laboratory cages, then released alone, through a sliding door, into a room with five artificial trees.

Their observers recorded the number of hops they made between branches within trees or flights between trees during the first two minutes of entry. This was the bird’s “exploration score”. There’s much more to support the conclusion of the study’s title: “Pairs of extreme avian personalities have highest reproductive success.”

The last time I looked, there were again two great tits attempting to land on the feeder – one male, one female (with a narrow belly band) making separate sorties at the nuts. But each time they were quickly repulsed by the occupying goldfinches.

Their scores for retaliatory aggression, one supposes, might not be the best. But they’ll hang around, I’m sure, to take their chance when all those flash finches have flocked off.