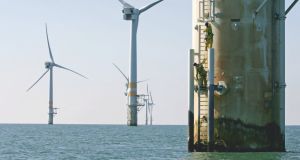 Engineers climb a turbine inspection ladder on the Airtricity wind farm on the Arklow Bank in the Irish Sea. Photograph: David O'Brien

Stephen Wheeler of SSE Ireland is a forceful critic of Ireland’s failure to respond adequately to climate change. His consistent stance is driven by frustration with lack of success in grasping its considerable opportunities through embracing renewable energy.

Taking such a course, he believes, would not have the country as it is on the back foot, facing big fines, and castigated as an environmental laggard close to the bottom of EU league table on actions, reducing carbon emissions and adopting a diverse range of renewable energy sources.

As managing director of SSE Ireland (the umbrella entity for all of SSE’s operations in Ireland) energy generation comes under his remit - and he’s utterly convinced of the ability of offshore energy to quickly help Ireland not only get on the right trajectory but to become a global leader in the sector - SSE Airtricity is the retail arm of the business, supplying energy to homes and businesses.

Mindful of the recent Climate Action Network Europe report which declared Ireland second only to Poland in tackling climate change, Wheeler says: “It’s shocking as Ireland has a world-renowned offshore wind resource and we’re not using it.”

“What’s worse is we know what we need to go, we have the natural resource, we have the capability and we have the investors ready and waiting,” he adds.

Over the past SSE has directly invested over €2.5 billion in development of sustainable, low-carbon energy infrastructure in Ireland, with four new onshore wind farms in the past 16 months. But the shift is to offshore.

The game-changer has been the dramatic fall in the cost of offshore wind, which is also converging with the price of solar photovoltaic (PV) and onshore wind, and has become a real alternative to conventional generation. Its power capacity is remarkable: 10 megawatts used to be the size of a small onshore windfarm in Ireland; this is now the size of one offshore turbine.

“We believe that given a supportive policy environment, the technology is ready and waiting to deliver the large-scale renewable energy capacity we require to meet our low-carbon ambitions and binding climate change goals.”

In the offshore revolution taking place elsewhere fixed-foundation turbines are the norm as they are best suited to shallower and calmer waters but floating technology is opening new frontiers. “The floating technology is still relatively new, although it has already been successfully deployed at a site in Scotland, ” Wheeler explains. There’s huge excitement about its potential, as it allows turbines to be installed in deeper water and withstand rougher seas.”

He adds: “For SSE, as with all of our projects, it’s simply about taking the most efficient and effective approach for the site we’re developing.”

In the short-term, Ireland has 4 gigawatts (GW) of sites at various stages of development on the east coast, and that number will increase with the deployment of floating technology on the west coast - it is estimated that 1 GW of offshore wind will deliver €2 billion of economic benefit for Ireland. These projects are close to large demand centres and require minimal onshore reinforcement to deliver large volumes of renewable energy to where it’s needed most.

The potential of the west coast, however, is enormous, he believes. “Ireland’s waters stretch very far west, and it’s certainly windy out there. Our seabed territory is actually one of the largest in Europe, more than ten times the size of our land mass.”

SSE has a major focus on the east coast through its Arklow Bank project, with the potential to deliver over 520 megawatts (MW) of capacity in the short term, “but we’re fully aware there are huge opportunities on the west coast, and we’re excited to assess them in the longer-term.”

As operators of the country’s largest onshore wind farm in Galway they are well established in the west, “so we know all about the local supply chain and resources that can help deliver a world-class project in that part of the country”.

Given the resources in both locations it’s hard to fathom that Ireland once held a leading industry position on offshore when the Arklow Bank Wind Park was commenced in 2004. It was a demonstrator project, he says by way of explaining why we did not kick on from that point. “In the years following, Ireland continued to opt for onshore wind, which was the cheaper and more mature technology, and was supported through grid connection and support scheme policies.”

“If that vision is set out by the Minister, we’re ready, willing and able to deliver the projects. As a developer, our focus is on developing the infrastructure that will help Ireland achieve its own renewables targets and build a sustainable energy future,” he says.

He is impressed with what is emerging. “It’s fantastic to see such a diverse range of generation technologies being discussed. To build the low-carbon energy system of the future, we’ll need a diverse generation portfolio, and it’s exciting to see emerging technologies like tidal and wave energy continue to develop.”

[the] challenge isn’t going away, Ireland needs to up its game

For now, SSE’s focus remains on wind energy, as a proven, scalable technology that can deliver large volumes of renewable power for Ireland in both the short and longer-term, “while helping us avoid fines for missing our binding EU targets”.

With details of the new Renewable Energy Support Scheme (RESS) finally emerging this month, he underlines the importance of technology-specific supports. SSE called for the inclusion of offshore wind as a separate category under the RESS. “This is because we don’t believe a technology-neutral approach will give offshore wind projects investment clarity in the timeframe that we need, or enable a local supply chain to develop.”

Alongside the introduction of a support mechanism, he says there is a critical need for certainty that grid access will be provided to offshore projects, as there is currently no such clarity in place. Equally, there is a need for a facilitative planning process. Where policy provides a clear route to market, investors and competition follow but “without these steps, the offshore revolution will be stalled before it even has a chance to begin,” he says.

The bottom line is in the face of increasingly demanding renewable energy targets “we cannot rely on the past to drive the future”, he says. “Onshore wind has carried us this far but it cannot alone deliver the volumes of clean energy we need to meet our targets. Progress towards 2030 will only be measured once we’ve met our 2020 targets, this challenge isn’t going away, Ireland needs to up its game.”

In spite of what he perceives as failures to address climate change and adopt and support renewable energy, he strikes an optimistic note:

“Ireland has been a leader in renewable energy in the past. We have the ambition, expertise and resources to get back to that point. We’ve made a number of big strides over the years, particularly through onshore wind, thanks to successful partnership between business and government.”

The technology may have changed, but the vision of a low-carbon future is the same, he stresses. “With the scale and urgency of the challenge now greater than ever, we need to act quickly and work together so that we can develop the sustainable infrastructure we need, meet our climate change targets, and reclaim our place as an international leader on renewable energy.”