Rainfall’s coming home: but sun will be back before long 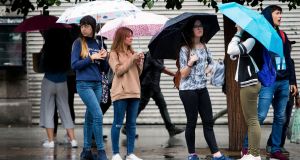 Rain is set to return on Thursday night and Friday. A small amount of rain fell last weekend. Here people shelter from it on Dublin’s O’Connell Street. Photograph: Tom Honan

Rain is on the way - at least for later on Thursday and Friday. But dry conditions will return in most areas for the weekend according to the latest forecast from Met Éireann.

The current drought which has ushered in nighttime water restrictions in the Greater Dublin Area and a general hosepipe ban has also given rise to concern for water levels in lakes and rivers.

On the Shannon, Waterways Ireland has advised boaters to beware of low water levels south of the Jamestown Canal in Co Leitrim, and north of Termonbarry in Co Longford. A number of vessels have already reported striking rocks in these areas.

On Thursday afternoon cloud will spread from the northwest with outbreaks of rain and drizzle developing in parts of Connacht and west Ulster by the evening. By nightfall mist with outbreaks of rain and drizzle can be expected everywhere and continue into Friday. Friday morning will see rain concentrated in the southeast around counties Wexford and Wicklow but this is expected to clear to isolated showers and some bright or sunny spells later.

Top temperatures will reach between 16 and 22 degrees, coolest in the northwest as light to moderate westerly winds at first become moderate northwesterly later.

Generally the outlook is for a mostly dry day on Saturday but becoming very warm and humid on Sunday and Monday followed by fresher conditions with scattered showers on Tuesday and Wednesday.

The Irish Farmers’ Association said the lack of consistent rain has given dairy farmers in particular, some of the “most challenging conditions in a generation”.

“At this stage, many dairy farmers, especially but not exclusively in the south and east of the country, are in very difficult situations, having eaten into their first cut silage, grazed their second cut, and wondering where the next bit of grazing will come from” IFA National Dairy Committee Chairman Tom Phelan said.

Irish Water said the situation in the Greater Dublin Area would be assessed next week “when we have seven days of pressure management data to review.” The analysis will inform a decision on whether to extend or increase the restrictions.

There has been no increase in calls to the customer care line regarding the impact of the pressure management which is what Irish Water said it expected given the low levels of this restriction.