Modular housing could be stacked on existing buildings

Los Angeles development, erected in just three weeks, could be a model for Dublin 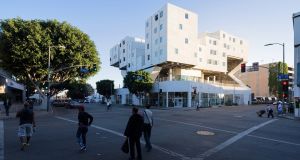 Factory-build modular apartments, that can be stacked on top of existing city buildings, could provide a solution to Dublin’s homelessness crisis, the Royal Institute of the Architects of Ireland (RIAI) annual conference will hear on Friday.

US architect Michael Maltzan has worked with the Skid Row Housing Trust to transform an existing one-storey commercial building in downtown Los Angeles into a mixed-used complex with 102 apartments for formerly homeless individuals.

The Star Apartments, which featured in this year’s Venice Architecture Biennale, have provided permanent accommodation in a dense urban area, without the need for demolition and site clearance.

Following their design and manufacture, the 102 stackable apartments, which arrived on site fully completed and furnished, were erected in three weeks in five storeys on top of the existing one-storey retail building.

Mr Maltzan, who is the conference keynote speaker, said he saw no reason why a similar construction approach to increase the density of housing, could not be used in Dublin.

“The technology to use a more modular, prefabricated approach is a technology that exists and is an accepted way of building in most developed industrialised countries.”

While modular housing had been more commonly used in suburban or semi-rural locations, he said, it could be the perfect solution for tight city centre sites.

“It probably hasn’t been used in exactly the way we have, to build denser multifamily buildings. But given the kind of moderate density I’ve seen in Dublin, the scale of building and sites, I don’t see any reason why it would be an overly challenged way of construction.”

Mr Maltzan has been working with the Skid Row Housing Trust since the mid-2000s on the provision of permanent, supported accommodation for the city’s homeless, whose population rose from 15,000-20,000 before the financial crash to an estimated 60,000 now.

The Star Apartments scheme was “our most ambitious in the different issues trying to deal with, and the largest at 102 units”.

In installing the apartments on top of existing shops the development “saved” a single-storey building, he said, “which is a rare thing to do in Los Angles. It’s a city that tends to erase its history.”

In addition to increasing density, this meant the street level remained animated and could continue to make a positive contribution to the city, he said.

The installation of the apartments involved building a new “structural tray” 20ft above the existing building. The completed apartment units were driven from Iowa on flat-bed lorries and then stacked on the tray.

The project cost $19.3 million and includes an onsite medical clinic, and 15,000sq ft health and centre. The LA county department of health services has also located some of its services in the ground floor.

“In addition to the benefits of buildings quickly, modular units provided particular high-quality accommodation,” Mr Maltzan said, “because the units built in a factory much higher level of finish for the equivalent cost.” They were also more environmentally friendly than tradition buildings.

“Prefabrication manufacturers are extremely good at finding ways to minimise construction waste, which is one of the biggest environment problems with building in general.”