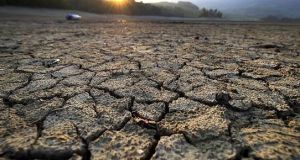 “Despite all of this unequivocal evidence supporting ambitious climate action, Ireland’s performance in meeting the goals of the Paris agreement and EU directives has been dismal”

The stark findings of the UN “1.5 degrees” report on global warming “heralds the end of the fossil fuel era”, according to climate justice campaigner Mary Robinson.

“We have entered a new reality where fossil fuel companies have lost their legitimacy and social licence to operate, and where we must embark on a just transition to protect people and their rights as we embrace unprecedented levels of climate action,” the former president said.

The need to get carbon out of atmosphere was made clear, and there was now an urgent need “to jump start a collective consciousness to save ourselves”.

“We will need to reforest rapidly. We will have to change our behaviour. I’ve said before and I’m trying to do it; we have to become aspiring vegetarians. Eat less meat.”

She said limiting warming to 1.5 degrees would reduce the number of people exposed to climate risk and poverty by several millions by 2050. “However, the 1.5 degree goal is not without risks, and these will disproportionately affect the poorest and most vulnerable people and communities.”

Climate policy expert Dr Diarmuid Torney of DCU said many thought 2 degrees was safe. “ This report makes clear that even 1.5 degrees will involve significant negative impacts, which will be greatly magnified if we exceed that threshold.”

He said the report was equally unequivocal in highlighting the world was on a very dangerous emissions pathway. “We are currently headed for 3 degrees. To have a reasonable chance of making 1.5 degrees, we need radical change between now and 2030, with further radical transformation thereafter.”

The report shows pathways towards 1.5 degrees, but governments, businesses and societies were “the ones that need to get us there”, he said. That was compounded by a challenging international political landscape.

A spokeswoman from Climate Case Ireland, which has challenged the Government’s National Mitigation Plan in the High Court on the basis it is inadequate to meet Ireland’s national greenhouse gas reduction commitments, welcomed the report

“Despite all of this unequivocal evidence supporting ambitious climate action, Ireland’s performance in meeting the goals of the Paris agreement and EU directives has been dismal.”

She said presentations by the secretaries general of government departments to the Joint Oireachtas Committee on Climate Action had shown no new actions were proposed beyond those in the flawed National Mitigation Plan, and that Ireland was still on course to overshoot the 2020 and 2030 targets.

“This is simply unacceptable given that Ireland is one of the top five wealthiest countries in the world. Irish citizens are demanding that their governments take action to ensure climate safety, and that we do our fair share of contributing to the Paris goal of 1.5 degrees. This is why we are taking the Irish Government to court.”

Friends of the Irish Environment, who are supporting the court action, said the IPCC report “makes clear that the cost of inaction dwarfs the cost of action”.

Pointing out Ireland had its own experience of the increased frequency and intensity of extreme weather events, a spokesman said: “The report amplifies the importance of Ireland addressing the roadblocks to our own path to deep decarbonisation.”

International reaction underlined the need for more ambition in tackling climate change, the former UN climate chief who led negotiations on the historic Paris agreement of 2015, Christiana Figueres, said. “There is nothing opaque about this new data. The illustrations of mounting impacts, the fast-approaching and irreversible tipping points are visceral versions of a future that no policy-maker could wish to usher in or be responsible for.”

Former US vice-president Al Gore said the Paris agreement was “monumental” but now nations had to go further and time was running out. “Solving the climate crisis requires vision and leadership.

“Unfortunately the Trump administration has become a rogue outlier in its shortsighted attempt to prop up the dirty fossil fuel industries of the past. The administration is in direct conflict with American businesses, states, cities, and citizens leading the transformation.”

The report demonstrated the need for far-reaching and immediate reductions in greenhouse gas emissions, said World Meteorological Organisation secretary-general Prof Petteri Taalas. “The global average temperature is already more than 1 degrees higher than the pre-industrial era. Arctic sea is shrinking and sea level rise is accelerating. We are suffering more extreme weather. Every fraction of a degree in temperature rise makes a difference.”

Trócaire said the report was “a clear call for an urgent increase in action if we are to avoid preventable further devastation”.

“The world is already experiencing the deadly effects of global warming at 1 degree. In the countries where we work, the impact of climate change is at crisis level,” said Trócaire chief executive Caoimhe de Barra. “Extended droughts and increased flooding across east Africa mean that millions of people are facing hunger and struggling to survive. As the planet warms even further, this will only get worse.”

Phil Kearney, chairman of An Taisce’s Climate Change Committee, said the report sent a message of both urgency and hope.

“Keeping global warming to 1.5 degrees requires an unprecedented shift, a rapid and far-reaching change across energy, land, urban and industry sectors. 1.5 degrees is still feasible, but only if policy-makers act now. We need a fundamental shift from incremental to transformational change to have a more secure and sustainable future.”

“Ireland is the only country in the world that measures, monitors and manages carbon from farm to fork, with over 200,000 carbon assessments now completed. No other sector of Irish society has demonstrated such a commitment to understanding and endeavouring to make a climate difference, given that there are just over 130,000 farm families in Ireland.”

He said the focus on production efficiency in Ireland, as recommended in the UN report, was making a difference, with emissions intensity per calorie of food output being approximately 14 per cent below 2005 levels. The figure was projected to fall a further 11 per cent by 2030.

“This is based on the delivery of current policy measures including the beef data and genomics programme; the targeted agricultural modernisation scheme, the green low-carbon agri-environment scheme, Bord Bia’s Origin Green programme and participation in the IFA-led Smart Farming initiative.”

He supported the report’s view that investment in low-carbon energy technologies and energy efficiency would need to increase dramatically to make the necessary climate difference.

Jennifer Higgins of Christian Aid Ireland, said the report clearly demonstrated “we can still limit temperature increases to 1.5 degrees, but to do so governments must act with urgency to bring about deep emissions cuts”.

She said Ireland and the EU must sign up to increasing their climate ambition by 2020 at this December’s UN climate negotiations in Poland, and commit to sustainable pathways to staying below 1.5 degrees, while it was still possible.