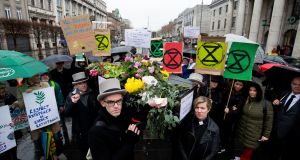 A few hundred protesters braved Sunday’s wind and rain to take to the streets of Dublin and mark World Wildlife Day by holding a solemn funeral procession and carrying a “coffin for humanity” through the capital.

The event, held by Extinction Rebellion Ireland (XRI), saw activists dressed in black walking in silence from the Spire on O’Connell Street to St Stephen’s Green.

Ciaran O’Carroll from XRI said the mock burial at St Stephen’s Green was held to highlight the juxtaposition between the small area of green space and the busy shopping area and consumerism of the Grafton Street district. He said the group was delighted to see so many people join the procession despite the cold, wet weather and that their support was proof of the growing commitment to support an issue that is being “lit up” around the world.

Other protests calling for action on climate change were held in Cork and Galway on Sunday.

The Irish branch of the XRI pointed out Ireland was not immune to the decline in insect populations and numbers of wild animals, highlighting that one in every four species in this country was threatened with extinction. “This is a truly shocking legacy that we are handing on to future generations.”

The group called on the Government to immediately implement the recommendations of the Citizens’ Assembly report on tackling climate change, to declare a state of climate emergency and to fully inform the public about the seriousness of the environmental crisis. It added that any policy changes made be carried out using a “just transition”, whereby the most vulnerable did not sacrifice the most.

“It breaks our hearts to see this planet ravaged, to watch so many people and animals all over this world already dying, to know that this will soon happen to our children without urgent changes,” said an XRI statement. “There is no way forward without giving credence to our grief.”

The group echoed the comments of President Michael D Higgins who last month said “if we were coal miners, we would be up to our knees in dead canaries” after noting that 91 per cent of the country’s internationally important habitats had “bad” or “inadequate” conservation status. The President warned that human beings “have been living an incredible contradiction” in believing their modern existence can continue unchanged, separate to destruction of nature and species loss.

The State’s Committee on Climate Action, which was set up for a limited term and was due to report by the end of January, has encountered difficulties in reaching a position on increasing carbon taxes. However, members have agreed on a number of measures including a target of 70 per cent of power generated in Ireland coming from renewable sources by 2030; an accelerated rollout of infrastructure for use of electric vehicles; the setting up of a permanent standing committee on climate action with powers similar to the Public Accounts Committee and the adoption of five-yearly carbon budgets that do not fall with a change in government.