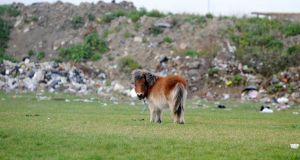 Illegal dump in Darndale, Dublin. A resident with children said he has not been able to allow them to play on the green space since he moved in. “There are rats running around, syringes, nappies, all sorts of rubbish.” Photograph: Aidan Crawley

An illegal rubbish dump is continuing to operate in north Dublin, despite Dublin City Council spending more than €230,000 last year to remove accumulated waste from the site.

Residents in Darndale say the green space facing the Belcamp Gardens and Moatview Court estates has been used as a dumping ground for decades, despite periodic attempts to clear the area by the council.

“I’ve been here nearly 30 years and the dump has been there almost all that time, but it was never as bad before the bin charges came in. Now it’s just constant dumping – it’s become a hill of rubbish,” one man living close to the site said.

Another resident with two young daughters said he had not been able to allow them to play on the green space since he moved in, 18 months ago.

“There are rats running around, syringes, nappies, all sorts of rubbish. You couldn’t let kids out. When the council cleaned it up last summer, straight away it started filling up again. People come in the night and dump out bags and bags of rubbish. To be honest I’m embarrassed to have anyone come to the house at this stage.”

A women who has lived opposite the site for 13 years said the dumping goes on “morning, noon and night” with impunity.

“They do it directly in front of council workers. I think it’s a combination of a commercial business, and just people from outside the area knowing that you can get away with dumping bags.”

Rubbish was frequently burned at the site, she said, which often resulted in toxic-smelling fumes. “A lot of the kids here have asthma, and there are a lot of people with cancer, but nobody seem to be doing anything to stop it.”

Residents asked not to be identified. Local Independent councillor John Lyons said clearing up the dump last year used up almost a quarter of the council’s budget for tackling illegal dumping.

“That the city council spent nearly a quarter of a million euro removing illegally dumped rubbish from what appears to be a commercial waste disposal facility operating without a licence in a densely residential area is quite incredible. It’s an insult to the families living in the area that this illegal rubbish dump has not be dealt with before now, as it’s been going on for years.”

The council had spent at least €2 million dealing with the site in recent years, Mr Lyons said.

A spokeswoman for the council said it had prosecuted “a number of individuals for illegal waste activities relating to this area resulting in criminal convictions”.

The council declined to say against whom the convictions had been secured, but said: “An investigation into current activities in the area is ongoing that may result in further enforcement action.”

The area was being continuously monitored, the spokeswoman said. “Waste enforcement officers continue to patrol the area and conduct roadside checkpoints with An Garda Síochána to impound vehicles and target these illegal waste activities.”