Six apartment blocks to be built in Chapelizod without planning permission 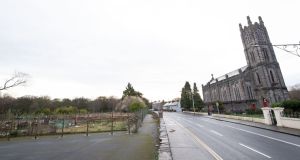 A complex of six “rapid build” social housing apartment blocks, up to five storeys high, is to be built beside the Phoenix Park in Chapelizod by Dublin City Council, without going through the planning process.

Work is due to start next month on the complex of 71 apartments, which is set to be the first prefabricated apartment development built in the city, on the site of community allotments at Springvale opposite the 19th-century Church of the Nativity on Chapelizod Road, Dublin 20.

Local residents have described the development as “disastrous” for Chapelizod village but have had no opportunity to appeal the scheme because the council is developing it without seeking planning permission.

The council is using emergency powers, introduced by the Government to deal with the housing and homelessness crises. Under its provisions, the council does not have to go through the normal planning process for local authority developments, if the council chief executive determines there is a need to deal urgently with “an emergency situation calling for immediate action”.

Modular housing estates, originally for homeless families in Dublin in Ballymun, Finglas, Drimnagh and Darndale, were built using this emergency provision. This meant no planning application was made by the council and no one could lodge objections, make submissions, or appeal the development.

The council is now using the same legislation to build social housing complexes at Bonham Street and Cork Street in Dublin 8, Bunratty Road in Coolock, Dublin 17 as well as in Chapelizod.

This is being done using emergency legislation, but I would be a hypocrite not to support it as it will take 71 local families off the housing waiting list

The apartments will be the first built by the council using modular “volumetric” technology. Under this system three-dimensional “pods” are built in factories and then assembled on site. The council had hoped to use a site on Fishamble Street in the city centre for a pilot prefabricated apartment scheme, but abandoned this plan last month due to spiralling construction costs.

The use of prefabrication along with the emergency planning provisions will allow the council to halve the build time, and the Chapelizod complex could be completed by 2020 it said.

However the Chapelizod Old Village Association (Cova) said it has been denied the opportunity to raise what it sees as serious issues in relation to the development.

“Dublin City Council is providing no facilities with this development. There will be families living here but the schools and the doctors are full and there is only one shop in the whole area,” Cova spokeswoman Róisín O’Grady said.

With more than 200 residents expected in the new complex, parking would also be a major problem for the area, she said.

“There are only 38 parking spaces going in, and no underground parking . . . the existing allotments are being dug up. Even if there were some affordable housing apartments to buy that might bring some benefit to the area, but it is 100 per cent social housing, which experience has shown is not a sustainable mix.”

The chair of the council’s housing committee Sinn Féin’s Daithí Doolan said he was aware of local concerns, but said social housing was badly needed in the area.

“This is being done using emergency legislation, but I would be a hypocrite not to support it as it will take 71 local families off the housing waiting list.”

The council said it has found a new location for the allotments.