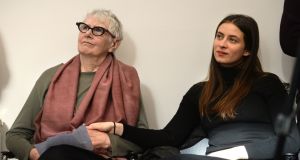 The room in the Georgian house on the North Circular Road in Dublin where her father wrote his best-known works, including The Shadow of a Gunman, Juno and the Paycock and The Plough and the Stars, remained untouched for decades, Shivaun O’Casey says.

“There’s a picture of Sean sitting in front of the fire in that room, it’s one that’s used a lot; it’s from when there started to be quite a bit of interest in him – after Juno but before Shadow.

“I remember when my mother was living in Ireland, I think it must have been the 1970s, walking into that room and everything was the same as the photo – the furniture, the peeling wallpaper, even the bit of material that was put over the fire to stop the smoke coming out. It was all still there.”

Although it is about 20 years since Ms O’Casey has visited the house at 422 North Circular Road, she says it has remained largely the same.

“Mr Eastwood, who owned the house when Sean lived there, he kept the room just as it was, and he never rented it out to anyone else. He had a sort of reverence for the room. Then his son, the next Mr Eastwood, did the same.”

His fellow tenants in the house, where he lived through much of the 1920s, provided inspiration for several of his characters, including Mollser Gogan and Captain and Juno Boyle. “Little Mollser lived underneath him and I think the Boyles lived on the first floor, but I think he could be living anywhere and he would have found stories.”

Ms O’Casey says she hadn’t been aware the house was for sale, but did know there had been suggestions over the years that it should be bought by the State and turned into a museum. However, she said the plan to use it for homeless accommodation would be a more appropriate use.

“I think homeless accommodation is far more important than anything at the moment. I think that would be a very good use for the house.”

It is a use for the house she believes her father would have wanted. “Although homelessness should not be a part of any of the civilised countries, it is unfortunately an unjust problem that needs help. The house should be made pleasant and habitable for the people who will live there. That’s what he would have wanted. He definitely didn’t want a ‘Sean O’Casey Society’ to be set up.”