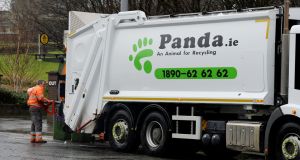 Irish households and business are all too often putting the wrong waste in the wrong bin, including almost half of organic household waste, according to a report from the Environmental Protection Agency (EPA).

Almost 70 per cent of the content of the residual bins of Irish businesses is in the wrong bin, and could potentially be diverted either to recycling or to brown bins.

“That doesn’t belong there,” should be the key message from the latest examination of what Irish households and businesses are putting in their bins, the EPA said on Thursday.

It also found that plastics have replaced organic waste as the largest waste type in the general waste from households, while the share of plastic in waste from businesses has almost doubled.

It found that food residue in containers and non-recyclable materials in recycling bins is causing increased levels of contamination, especially in household waste and reducing the amount of waste that can be recycled into high-value products.

The study “shows that while we are doing some things well, home owners and businesses still have a lot to improve upon when it comes to what we are putting in our bins”, EPA director general Laura Burke said.

Minister for Environment Richard Bruton said more needed to be done to support people in understanding how to use their bins. “We can see that most misplaced waste goes in the black bin, with 36 per cent being more appropriate to the compost or recycling bin.”

While recycling volume has risen, it is still modest and we need to do more to encourage people to recycle, he said.

General waste is rising rapidly, at 580kg per head per year (2016 figures) but it is the composition of this waste that is also of concern, with an increased percentage of this waste coming from plastics, cardboard and metal, Mr Bruton said. “This raises concerns about unnecessary packaging.”

Three areas highlighted for future focus included plastic, food waste and single-use materials. Single-use materials (coffee cups and tissue paper/napkins) “have become a very significant part of what we throw away and measures will be needed to address this,” he said.

Two-thirds of plastic waste that ends up in bins was not being targeted by Ireland’s recycling list. “A broadening of the scope of what can be recycled by Irish homes and businesses will be needed to meet our future targets,” he said.

There has been a dramatic reduction in cardboard as a proportion of commercial waste. Conversely, the share of cardboard has increased slightly in household waste.

Coffee cups make up 14,000 tonnes of commercial waste being generated annually – about 4 per cent of the total generated.

While the overall share of paper waste has declined significantly, particularly for households, tissue paper/napkins form a significant part of both household and non-household waste.

Tissue paper accounted for 10 per cent of non-household waste. Stephen Treacy, senior scientific officer at the EPA’s Office of Environmental Sustainability (OES), said coffee cup levels were “avoidable”. He believed the level of tissue paper may be due to a move away from using hand driers and roller towels in favour of disposable towels.

Even though restaurants have brown bins, organic waste was still the largest waste category in their residual bins (29.5 per cent).

Food waste regulations specify that commercial businesses are to separate out their food waste and put it into the brown bin for recycling and not into the residual bin, said Percy Foster, chief executive of Cré, the Composting and Anaerobic Digestion Association of Ireland.

“It’s disappointing to hear that over a third content of residual waste is food waste still and unfortunately is clear evidence that the commercial food waste regulations have failed and Minister Bruton needs to change policies to fix the situation,” he added.

The EPA’s director of the OES, Dr Eimear Cotter, underlined the need to prevent large quantities of waste getting into bins in first place. “By avoiding waste in the first place, you reduce the need to collect, process, treat and or dispose of it . . . We are targeting the most pressing waste prevention priorities, with plastics and food waste identified as key areas for 2019.”

What can go in the recycling bin

Hard plastics are fine; soft plastics – clingfilm or plastic bags – are not though some local authorities collect soft plastic at recycling centres.

Glass bottles have to be recycled separately at bottle banks.

The over-riding rule is “clean, dry and loose”. Wet paper or cardboard is problematic, such as a pizza box covered in cheese.

What can go in the food waste bin

The “No thanks” items

The residual bin – or black bin

Materials such as textiles, glass, electrical goods, and hazardous waste including batteries can be properly managed via mixed kerbside collection, so should not be placed in household or commercial bins.

Advice on best practice is available at mywaste.ie