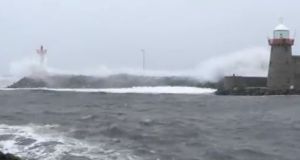 A status orange weather warning is in effect as Storm Callum arrives in Ireland.

Met Éireann issued a status orange weather warning for the weather event, which will hit Ireland from Thursday night, bringing gales of up to 130km/h along coasts and the possibility of local flooding.

The National Emergency Co-ordination Group (NECG) met on Thursday as the State prepared for the arrival of the storm.

The NECG is made up of officials from various State agencies, including the Office of Public Works, Met Éireann, the Department of Defence, the Garda, the Defence Forces and the Coast Guard. It met at 3pm to co-ordinate the State’s preparations and response to the storm.

Met Éireann meteorologist Siobhán Ryan said: “The strongest winds will be all around the coast of Ireland but with a particular emphasis on Atlantic coastal counties, and there will be rain accompanying it too.

“An orange weather warning is not to be underrated, it is a severe weather warning. Late Thursday night until Friday, there is the possibility of localised flooding. You’re going to see some violent gusts up along the coast potentially.

“All the obvious things apply – stay away from exposed coasts, drive slowly in the anticipated crosswinds. The trees are still heavily leafed at the moment so there is the potential for further trees to fall.”

Heavy rain and extremely windy conditions will sweep in off the Atlantic on Thursday night and gradually extend northwards across the country.

The south or southeasterly winds will strengthen, with severe and potentially damaging wind gusts likely, especially in coastal districts.

Met Éireann said the rain will turn heavy and squally at times, with isolated thunderstorms possible. Minimum temperatures will be between 8 to 11 degrees.

Coastal flooding is likely, due to the combination of high seas, high tides, strong winds and low pressure.

However, Met Éireann said conditions should abate fairly quickly on Friday afternoon, with drier weather developing for a time.

A yellow weather warning has also been issued by the UK Met Office for Northern Ireland, with severe gales expected between 3am on Friday and 12am on Saturday set to cause some disruption.

The Met Office cautioned that winds would bring a “small chance of injuries and danger to life from flying debris” and that there was “a slight chance of some damage to buildings, such as tiles blown from roofs”. It said some roads may close due to the strong winds and that there was a chance of power cuts.

The Met Office also advised people on Northern Irish coastal areas to take care as “large waves” could occur during the storm, with beach material being thrown up onto sea fronts.

The Coast Guard strongly advises the public to stay away from exposed beaches, cliffs and piers, harbour walls and promenades along the coast during storm conditions.

The Commission for Aviation Regulation warned that passengers scheduled to fly into or out of Irish airports on Friday may experience some disruption as a result of the storm.

On Thursday night, Kerry Airport announced that Friday morning’s 7.30am Aer Lingus regional flight EI3201 from Kerry to Dublin has been cancelled.

Following the NECG meeting on Thursday, the Department of Education said that schools should “err on the side of caution” when considering whether to remain closed on Friday.

“Schools and all education centres in areas affected by a status orange alert should remain vigilant, and keep themselves appraised of any hourly and other updates from Met Éireann, and from their local authorities, local radio, and An Garda Síochána.”

The public has also been warned against visiting national parks, monuments and nature reserves during the storm by the National Parks and Wildlife Service (NPWS).

In a statement on Thursday, it also said all woodland areas in the Wicklow Mountains National Park and woodland nature reserves in counties Wicklow, Wexford and Kilkenny that are managed/owned by the NPWS have been closed to the public for the storm, while visitors were asked not to visit Killarney National Park and the Cork and Kerry nature reserves for the duration of the status orange warning in counties Cork and Kerry.

It also said the following parks and reserves will be closed on Friday:

Dublin City Council said that the tide gates at Merrion Gates had been closed as a precaution ahead of the storm. It said on-call crews will be available to clear any debris.

Outreach teams operated by Focus Ireland and the Peter McVerry Trust will also be out on the streets of Dublin, helping and working with people at risk of rough sleeping.

“At the moment Met Éireann is forecasting that strong winds coinciding with high spring tides will affect Ireland with winds gusting between 110 and 130km/h along coasts. High tide along the Fingal coast during this period will be at approximately 2am on Friday morning so there is the possibility of flooding in vulnerable areas,” it said.

It added that council crews would distribute sandbags on Thursday to areas along the coast where flooding might occur and details of sandbag distribution points will be available from the council’s operations team on the following numbers: Balbriggan/Swords: (01) 8905595/8905596; Howth/Malahide: (01) 8906260.

It has asked for reports of people sleeping rough to be telephoned to 1800-707707 or posted online at www.homelessdublin.ie.

Meanwhile, Cork City Council issued a warning to pedestrians and motorists to avoid low-lying city quays on Thursday evening and on Friday as they may suffer from localised spot flooding during high tides at about 8pm on Thursday and 8.15am on Friday.

A Cork City Council spokeswoman said that the council would put traffic restrictions in place from 5pm on Thursday evening until 10am on Friday along low-lying quay areas such as Morrison’s Island, Union Quay, Wandesford Quay, Frenches Quay and Crosses Green.

Cork County Council’s crisis management team met on Thursday and was reviewing the key risk areas in the county, with tidal surges and strong winds posing a flooding threat in a number of coastal towns in east and west Co Cork.

Five western counties also made preparations for the storm. Galway city and county councils undertook extensive preparations due to the risk of flooding from the combination of storm-force southeasterly winds and the high spring tide of 5.2m due at 7.47am on Friday.

Galway City Council has installed a temporary 80m “aquadam” at Spanish Arch on the river Corrib estuary, while floodgates have been installed at Toft carpark in Salthill.

Sandbags were being made available for collection at the Spanish Arch, the Galway fire station and the Salthill aquarium, and a number of roads and carparks were closed from 8pm on Thursday night until further notice.

Roads and carparks due for closure in and around Galway were Lough Atalia from the junction with College Road to the Galway city docks; Eyre Square’s south side from the east towards the docks; Queen Street, Victoria Place and Dock Road; the inbound slip lane at the G Hotel on the Dublin Road; Salthill and associated roads, and Silver Strand.

Wexford County Council’s crisis management team met and agreed to erect flood defence barriers in Wexford, New Ross, Arthurstown and Ballyhack and to the filling and stockpiling of 5,000 sandbags for use if needed in Enniscorthy.

Civil Defence personnel and equipment are on standby and there will also be continuous cleaning of gullies and shores to minimise local flooding.

Another spell of very heavy, possibly thundery rain will push northwards later on Friday, and rain will be widespread on Friday night and for a time on Saturday. It will turn drier and fresher later on Saturday and then overnight.

Sunday is due to be a bright and fresh day with cooler conditions. There will be sunny spells and scattered showers, with some possibly heavy and prolonged showers in western areas later in the day.

During Storm Ali last month, which claimed two lives, wind speeds of more than 140km/h were recorded at Mace Head in Connemara early on September 19th, with peak gusts between 7am and 8am. There was much criticism of lack of adequate warnings on the west coast for the storm.

A Swiss visitor, Elvira Ferrari, who had come to Ireland to learn English, died after the caravan which she was renting was swept off a ledge towards the Atlantic shoreline at a campsite in Claddaghduff outside Clifden.

A falling tree killed a man in his 20s and injured a man in his 40s while they were working at a water pumping station in the Slieve Gullion forest park area near Newry, Co Down.