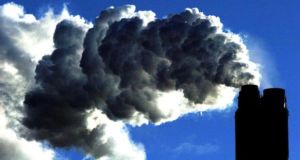 The latest report from the Intergovernmental Panel osaid eminds us that greenhouse gas emissions caused by industrialisation have already warmed the planet by one degree. Photograph: John Giles/PA Wire

Confirmation that there is not even a modest increase in carbon tax in Budget 2019 is shocking, given Ireland’s track record in tackling climate change versus the rest of the world.

The budget coincides with a report by the world’s leading climate scientists in which the science could not be clearer: the Earth is warming at an accelerating rate, giving us less than 12 years to turn down the temperature dial to have a chance of keeping to within a 1.5 degree global rise on pre-industrial levels.

The scientists who are part of the UN Intergovernmental Panel on Climate Change provided the bluntest of assessments. Civilisations are at a stake, the effects of human-induced climate change will take its toll on the planet in less than 12 years, and we are currently tracking for a three-degree increase this century that would bring catastrophic climate change.

Does Ireland believe it is going to somehow avoid the associated extreme weather events; the floods, the droughts? Does it believe it can hold-off on meeting its global obligations?

For months, there were indications that the Government was considering a rise in the current carbon tax of €20 per tonne, ie a tax on the burning of fossil fuels including oil, diesel, petrol, coal, gas and peat.

Taoiseach Leo Varadkar, Minister for Finance Paschal Donohoe and Minister for Climate Action and Environment Denis Naughten appear to get climate change and the need for sustainability.

Based on their public pronouncements, they recognise the need to transition quickly to a decarbonised and climate-resilient society and for Ireland to honour its promise to contribute to the global effort and shake off our “laggard” status in reducing carbon emissions and adopting renewable energy.

Mr Naughten has acknowledged the need to increase carbon tax but declined to say by how much. The Government’s own advisers, the Climate Change Advisory Council, has called repeatedly for a significant increase; its chairman Prof John FitzGerald has been a broken record on this requirement.

A €10 rise, for starters, was justified with a view to increasing it regularly up to at least €80 per tonne by 2030 was necessary, he suggested. For two reasons: to send a signal that those who invest in greener technologies and renewable energy would be supported in an orderly move away from fossil fuels, and to prompt a shift in human behaviour in decarbonising the way we live (especially in driving our cars and heating our homes). Sometimes sticks are required.

So what happened? Either there is a fundamental lack of understanding across Government and within the Cabinet on the extent of the immediate threat of climate change and of the need for urgent action, especially in the face of policy failure so far in turning down the rising curve of Irish carbon emissions.

Or narrow-visioned, short-cycle economics still dominate thinking which, combined with parish pump politics, resulted in a thumbs down for the tax increase.

Put crudely, it adds up another manifestation of a shameless “pay later” ploy, though it has to be acknowledged Mr Donohoe has at least flagged a move to a series of long-term increases targeted out to 2030 in forthcoming budgets.

Prof Peter Thorne of Maynooth University encapsulated the issue: “The true cost of carbon, if accounting for the warming impact, is likely somewhere in the range of €150-€200 per tonne. It’s currently taxed at 10 per cent of that. The result is a huge IOU to future generations.”

Carbon tax is not a panacea but it is an important step in underlining intent. The concerns of rural TDs are easily assuaged by looking at the latest ESRI study which estimates that an increase in the carbon tax of €5 per tonne of CO2 will on average increase consumer prices (measured by Consumer Price Index) by 0.13 per cent and producer prices by 0.08 per cent.

What is more, it can be used to fund climate actions while easing other taxes in a progressive way.

Prof FitzGerald has been equally frank on the need for cross-party agreement in the Oireachtas to collectively pursue the kind of hard measures, including a realistic price on carbon, so that Ireland can become a global leader in climate change.

Ireland has a lot to do to catch up with other rich countries who are embracing and meeting ambitious climate targets. Yes, it has become a global leader in embracing large volumes of renewable energy on to the national power grid and in pursuing a course of fossil fuel divestment.

But effective actions to counter rising emissions in transport, agriculture and heating remain elusive. A significant carbon tax can play its part in that mix and help turn that curve downwards.

If Ireland really wants to be a world leader on climate change, it should also be standing with more environmentally-progressive countries such as the UK, the Netherlands and Scandinavian states in moving to put a carbon floor price in place to underline big ambition for transition in the quickest possible way to a carbon-free world.