Storm Callum safety tips: What you can do to prepare

Take extreme care on roads, stock up on batteries and secure your patio furniture 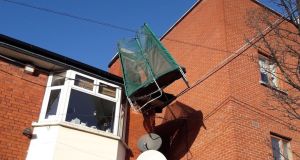 If you have a trampoline, make sure to secure it safely. Photograph: Dublin Fire Brigade/Twitter

With Storm Callum set to hit Ireland on Thursday night, various organisations have issued advice on safety precautions members of the public should take.

Met Éireann has said the storm is due to bring gale speeds of up to 130km/h in coastal areas, which also face a risk of flooding.

The following weather warnings have been issued:

The strongest winds of Storm Callum will occur during Thursday night and Friday morning rush-hour. A spell of heavy rain and possible thunder is also due to occur.

What is an orange alert?

A category orange warning, according to Met Éireann, is issued for weather conditions which “have the capacity to impact significantly on people in the affected areas”. It implies all people in affected areas should prepare themselves “in an appropriate way for the anticipated conditions”.

An Garda Síochána has advised motorists to take extra care on the roads due to the possibility of debris and local flooding. In particular, gardaí advise extreme caution if driving near waterways.

Motorists should also avoid parking their cars in areas which are likely to flood or where debris could fall from nearby trees. Drivers should not attempt to pass through flooded roads and are asked to heed any warnings or detours set by local authorities or gardaí.

Dublin Fire Brigade have reminded people who own trampolines to store them correctly in anticipation of strong winds. “Disassemble them or make sure they are anchored down securely,” it said. “Same for any garden/patio/balcony furniture.”

The fire brigade also advised people to stock up on batteries and charge devices in preparation for any possible power outages. It advised against the use of real candles, recommending LED alternatives.

To avoid spot flooding entering your home, the fire brigade said to ensure nearby drains are clear of leaves

ESB Network’s safety advice in the event of faults is to never approach or touch fallen electricity wires. It advises to call its emergency service immediately on 1850 372 999.

Storm Callum is the 3rd storm of the 2018/2019 season, according to Met Éireann, following Ali and Bronagh in September.