Music cheaper than ever, but environmental cost is soaring, say experts 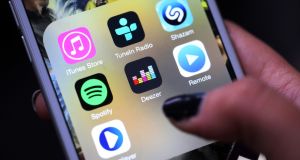 Listening to music has never been cheaper, however its environmental costs have never been higher, according to a new report.

Research entitled The Cost of Music from the University of Glasgow and University of Oslo has found that while the economic costs of recorded music consumption have steadily fallen in recent decades, its carbon emissions costs have soared.

The research was published in the lead up to Record Store Day, which takes place on Saturday, and is held around the world to promote the culture of independently owned record stores.

Dr Kyle Devine, an associate professor in music at the University of Oslo, led the research on the environmental cost of recording formats.

“From a plastic pollution perspective, the good news is that overall plastic production in the recording industry has diminished since the heyday of vinyl,” he said.

“From a carbon emissions perspective, however, the transition towards streaming recorded music from internet-connected devices has resulted in significantly higher carbon emissions than at any previous point in the history of music.”

The amount of plastic used by the US recording industry significantly dropped when downloading and streaming took over, to around 8 million kgs by 2016.

“These figures seem to confirm the widespread notion that music digitalised is music dematerialised. The figures may even suggest that the rises of downloading and streaming are making music more environmentally friendly,” Dr Devine added.

“But a very different picture emerges when we think about the energy used to power online music listening. Storing and processing music online uses a tremendous amount of resources and energy – which [have] a high impact on the environment.”

The researchers said it is possible to demonstrate this by translating the production of plastics and the generation of electricity (for storing and transmitting digital audio files) into greenhouse gas equivalents (GHGs).

The advent of streaming over the last decade now means for around $9.99 (€8.87), or just over one per cent of the current average weekly salary in the US, consumers now have unlimited access to almost all of the recorded music ever released via platforms like Spotify, Apple Music, YouTube, Pandora and Amazon.