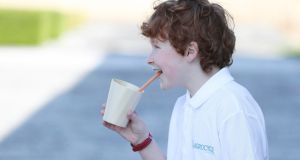 Edible drinking straws and cups made from potato pulp could replace single-use plastic items, according to researchers making new products from agricultural and food waste.

“The idea of drinking straws that people can eat – with flavours and colours added – is something hotels, restaurants and canteens will be interested in,” said Shane Ward, professor of biosystems engineering from University College Dublin (UCD) at a demonstration on Friday of new eco-friendly foods and packaging.

Rice-cream dessert, rice cookies and rice bread made from rice husks were among the new products showcased by Agrocycle, a UCD-led project bringing together researchers from eight EU countries as well as China and Hong Kong.

A bioplastic with a coating made from potato pulp to improve shelf life of food products was another prototype, developed by an Agrocycle team in the Fraunhofer Institute in Germany.

“This will meet the consumer demand for green packaging and reduce plastic pollution by providing a sustainable and functional alternative to fossil fuel-based plastics,” said researcher Andreas Stabler.

The aim of the project, according to Tom Curran, project co-ordinator at UCD, is to provide farmers and food processors with more valuable options for waste materials while reducing both food waste to landfill and plastic pollution.

“Farmers currently give away agricultural waste or get a small price for it. For example, they can only sell rice bran for animal feed but we are showing how there are more valuable human food alternatives for it,” said Prof Curran.

As well as developing biodegradable packaging and new human foods, the Agrocycle project has discovered ways of diverting food from landfills.

For example, researchers found that residues from growing mushrooms were a nutritional feedstuff for pigs. “About 10 per cent of mushrooms harvested in tunnels go to waste because they are the wrong size or shape but our researchers found mushrooms are a good way of getting vitamin D into pigmeat,” said Prof Curran.

A website, www.agrocycle.eu, which allows farmers and food producers to connect and sell their waste to biogas energy producers and start-up companies developing new products, was also launched at the event at the Department of Agriculture, Food and Marine research site in Celbridge, Co Kildare on Friday.

The website will enable farmers to sell their agricultural waste to start-up food and packaging companies as well as to bio-digesters which turn agricultural and food waste into biogas which is then used to supply electricity.

“The current EU target is that 20 per cent of gas will be supplied by biodigesters in Ireland by 2030,” said Agrocycle researcher Ciara Beausang.

Up to 20 per cent of fruit and vegetables produced by farmers was wasted and sending this material to a biodigester “would give them a higher value for their waste”.