Coillte praises Sitka spruce as the ‘Friesian cow of trees’

People from Sweden are ‘astonished by our yield figures’, Irish Planning Institute told 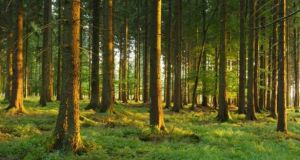 The Sitka Spruce is the “Friesian cow of trees”, a senior Coillte executive has told a planning conference in Co Leitrim, where there is widespread concern about the increasing number of private Sitka plantations.

Questioned as to why the State forestry agency did not grow more broad-leafed trees, Ciarán Fallon, Director of External Affairs with Coillte, said that Leitrim was probably the best place in Ireland for growing Sitka Spruce, and that the conifer does much better in Ireland than it does in its native habitat on the west coast of North America.

“It is the Friesian cow of trees,” he said, referring to the famously productive breed of dairy cow. While the measure used for forestry yield might score eight or nine for a good crop from a Sitka Spruce plantation in Sweden, Ireland can score in the low twenties.

People from Sweden are “astonished by our yield figures”, he told the annual conference of the Irish Planning Institute, in Carrick-on-Shannon.

A number of speakers from the floor raised questions about the biodiversity of Sitka Spruce plantations and the quality of the timber they produce. Mr Fallon said 53 per cent of Coillte’s estate was Sitka Spruce forest, while another 20 per cent was other types of conifers. Twenty per cent was broad leaf.

“Ireland has an enormous strategic advantage over other countries when it comes to growing Sitka Spruce,” Trevor McHugh, of the Veon consultancy group, told the conference. With broad leaf trees “it was very difficult to make them a commercial reality for the land owner”.

Mr Fallon said its timber made for a very sustainable form of building and that new ways were being developed to overcome the weaknesses of faster-growing wood.

Conifer plantations did not have the same biodiversity as open broad-leaf forests, but they are “doing different things”, he said.

In January, the Government set up a study of forestry in Leitrim, which has the highest level of forestry cover in the State. The Irish Farmers Association has expressed concern about the extent to which land in Leitrim is being increasing covered with Sitka Spruce, often on small holdings owned by local farmers.