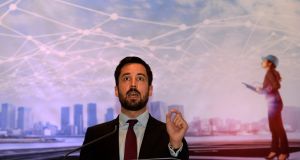 Minister for Housing Eoghan Murphy: “we also have to make sure that people aren’t using the planning system to try and stop new homes being built where they are needed.” Photograph: Dara Mac Donaill

“Objection culture” is one of the most serious challenges facing the system as more and more houses are being planned for and built, Minister for Housing Eoghan Murphy has said.

“We are seeing more and more objections, and unfortunately we are seeing some politicians getting involved in those objections as well,” Mr Murphy said.

Good planning and proper sustainable development were essential, “but we also have to make sure that people aren’t using the planning system to try and stop new homes being built where they are needed”.

“We have a housing shortage. It is being corrected, but we need to make sure we aren’t having any unnecessary delays in correcting it.”

Mr Murphy was speaking to reporters at the annual conference of the Irish Planning Institute in Carrick-on-Shannon, Co Leitrim, where a number of speakers referred to the growing level of objections to planned developments.

“I think people who are fortunate to live in a home and own a home should recognise that other people want to have that comfort and security as well.

“And when we look to the future, particularly at things like climate change, and also quality of life, we have to increase density in our urban areas. That means more homes, it means higher buildings.

“It does not mean skyscrapers on every street. But people need to understand that it is necessary if things are going to be better for everyone.”

Born out of fear

The “objection culture” was born out of fear, but a lot of time that fear was unfounded, he said. Planners and local authorities needed to be more proactive in explaining the vision they have for a local area, or for a building that might be higher than other buildings in the area.

Mr Murphy said he was going to bring forward new measures to reform the judicial review process later this year with the aim of helping develop strategic infrastructure projects in a timely manner “while removing the scope for vexatious complaints”.

The new legislation will restrict third parties who have no involvement in planning applications from initiating judicial reviews after the decision is made.

The minister said no other country allowed such objections. The reforms were being made partly in response to what happened with the abandoned plan for an Apple data centre in Athenry, Co Galway, but also for other reasons.

Apple cancelled the Athenry project because of delays caused by objectors who challenged the granting of planning permission.

“You see situations where the local community wants to proceed with a particular development which will keep jobs in that community, and people who might own holiday homes, who are only there for a fraction of the year, are making objections,” the Minister said. “Is that fair?”

He said it was important that an “objection culture” was not allowed to prevent us from making decisions that were “not only in the best interests of existing communities, but also all of the new people who are going to live in the country, the extra one million over the next 20 years”.

Mr Murphy said the work of the newly-appointed Planning Regulator, Niall Cussen, would increase public confidence in the planning authorities.