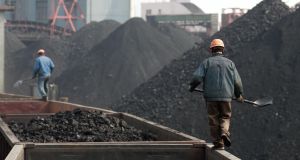 A coal depot in Shanghai. The ban on smoky coal was first promised in 2015. Photograph: Qilai Shen/Bloomberg

Plans for a national ban on harmful smoky coal have been delayed by the Government amid legal threats from the coal industry.

The introduction of the long-promised ban had been scheduled for this September but Minister for Climate Action and Environment Richard Bruton has now confirmed it will be pushed back. He gave no indication of when the ban would come into force.

“I am aware of the need to provide clarity now to the public and to the trade to enable them to adequately plan for purchases of stock for the 2019-2020 heating season. I can confirm therefore that the current ban on bituminous coal will not be extended nationwide for the 2019-2020 heating season,” he said in response to a Dáil question from Independent TD Michael Healy-Rae.

The ban on smoky coal was first promised by Labour’s Alan Kelly in 2015, when he was minister for the environment. He promised it would be introduced in 2016 and would come into effect in 2018.

In 2017, the then minister, Denis Naughten, said he would give coal suppliers a one-year period from the intended introduction date to run down their supplies, meaning it would come into effect in September this year.

However, the department has been under sustained pressure from coal importers behind the scenes, The Irish Times understands. It confirmed in recent weeks that a number of firms had threatened legal action if it went ahead with the ban.

It is understood that among the firms to indicate they would pursue a legal challenge is Tyrone-based LCC group, run by Michael Loughran and his family. LCC did not respond to a request for comment.

The first solicitor’s letter to the department on the issue was sent in 2015, while correspondence with solicitors, fuel firms and officials continued through to last May. It is understood that there were significant misgivings among officials about proceeding with the ban in the face of opposition from some firms, although market sources believe Mr Naughten had resolved to enact the ban despite the threats.

Mr Kelly, who introduced the first plans for the ban, said the delay was “not acceptable”.

“It is ridiculous this Government has now pushed the boat out again,” he said. “They should have the courage of their convictions to implement immediately,” he added.

“Hundreds of people will die because they haven’t implemented the ban as soon as intended. It will also result in a loss of investment and jobs,” Mr Kelly added.

Research published in the European Heart Journal earlier this year suggests that dirty air is killing almost 800,000 people per year in Europe, more than double the previous estimate. Poor air quality has previously been linked to about 1,500 deaths per year in Ireland.

The delay has also caused concern in sections of the fuel industry. Sources said it had the potential to endanger jobs at plants such as the smokeless fuel factory at Foynes, where CPL Fuels has invested €22 million in recent years. Tim Minett, the chief executive of the firm, has previously said the plant was running at a quarter of its capacity, and that the firm had shelved plans for a second phase due to delays to the ban.

Andy Maher, who has invested €3 million in a new smokeless fuel plant at Stafford Fuels in New Ross, said he was “very disappointed” with the decision. “We made an investment on an expectation that there would be three times the amount of smokeless fuel sold.”

He criticised the Government for not indicating a new date for the ban. “It is very difficult for us to plan in an information vacuum of that nature,” he said.