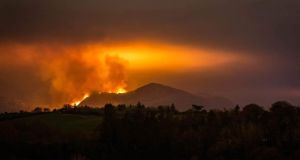 Hundreds of acres of forest were burned and young wildlife incinerated in a major fire on Torc Mountain in Killarney National Park.

Fire crews battled the flames overnight and the fire was finally brought under control in the early hours of Saturday morning.

It is not yet known what sparked the fire which was first reported at 10pm on Friday in a remote area at the back of the mountain.

Killarney solicitor Pat F O’Connor, a former town councillor, who has been outspoken on the issue, has described what is now an annual occurrence threatening the whole of the national park as “wanton destruction.”

There had not been one single prosecution in the courts in Killarney for the wildfires, he said. However these were criminal acts and every effort must be made by the authorities to find and prosecute whoever is responsible, he said on Saturday.

“Will human life have to be lost or the whole tourist industry destroyed before this is taken seriously?” Mr O’Connor asked.

While earlier restrictions were in place the mountain is now fully accessible to the public except for the boardwalk on the southern side due to fire damage.

The Minister for Culture, Heritage and the Gaeltacht Josepha Maddigan thanked Kerry fire services for their efforts. The damage caused by the wildfire is currently being assessed, her Department said.

1 WHO warns of potential for ‘immediate second peak’ in Covid-19
2 Archaeologists are ‘quite sure’ they have found Red Hugh O’Donnell’s burial place
3 Coronavirus: No new Covid-19 deaths reported in State for first time since March
4 Tributes paid to Ireland’s deputy ambassador to China who died on Sunday
5 Unidentified man has been in Irish psychiatric hospital for 30 years
Real news has value SUBSCRIBE