Unusual occurance is blamed on ‘old, ancient faults’ running through the county 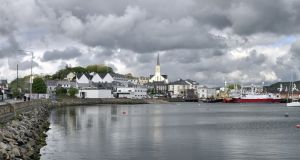 Donegal was struck by a 2.4 magnitude earthquake overnight.

Residents in the south west of the county, from Donegal Town to Killybegs and Ballyshannon, are reporting a tremor lasting more than 10 seconds just before midnight.

Some described it as sounding like an aeroplane flying overhead or snow sliding from a roof.

The minor quake was picked up by both the Irish National Seismic Network nd the British Geological Survey seismic stations.

Brendan O’Donoghue, a physics teacher at St Columba’s College in Stranorlar, where special equipment recorded the event, said it was not a precursor to anything more destructive.

“There are 20 or 30 events like this every day in California,” he said.

“They would pass largely unnoticed. If you talk about a very active seismic region, this wouldn’t really raise any eyebrows.

“But because of the nature of our environment here, these events are news. I suppose people find it it interesting, but it doesn’t mean we are at risk from a larger energy event.”

Mr O’Donoghue told Highland Radio there are “old, ancient faults running through Donegal” from the Great Glen in Scotland.

A number of listeners contacted the radio station during Monday recounting their experience of the tremor.

“It lasted more than 10 seconds. I ran outside to see was it a plane but heard nothing after that,” one said. Another said it sounded like snow sliding off a roof.

Mr O’Donoghue urged people to report their experiences online at the Irish National Seismic Network website.“It is an unusual experience to say the least,” he said.

The Irish National Seismic Network is operated by the Geophysics Section within the Dublin Institute for Advanced Studies (DIAS) with support from t the Geological Survey Ireland (GSI).

“ Events of this nature are not uncommon in the region, however earthquakes with magnitudes larger than 2 are recorded only every few years onshore Ireland or near it’s coast,” the network said in a statement on its website.

‘The power was well above thunder’

Members of the public submitted remarks to operators at theIrish National Seismic Network on how the earthquake felt and sounded in Donegal.

One report from Kilcar said they heard a “Rumble like thunder far away. A shake and rumble like a lorry passing”, while another said: “Felt very slight vibration of the house. Heard long low frequency rumble. It was not loud, but you could sense the power was well above thunder.”

A report from Killybegs said: “Felt very slight vibration. Sounded like a generator starting up but faded quickly.”

A report from Glencolmcille said: “The house was trembling like what you get when a digger works outside your frontdoor. Heard a rumbling, wooshing.”

In Ardara, according to a report, they “felt nothing,” but “heard a rumbling sound for about 8-10 seconds, like a really strong gust of wind, or a large vehicle rumbling past the house”.

That time the quake measured 1.5 on the Richter Scale, and was felt by hundreds of residents around the Milford and Kilmacrennan areas.

The centre of the quake was thought to have occurred off the Fanad Peninsula but could be felt for several miles inland.

1 People who throw house parties can be fined €1,000 and jailed for up to a month under new proposals
2 One hundred Irish retailers for all your online Christmas shopping
3 Extra day to Dáil debate on extending State’s powers during pandemic
4 School ordered to reopen after closing due to Covid-19 fears
5 Thirteen further deaths and 1,269 new cases of Covid-19 recorded in the Republic
Real news has value SUBSCRIBE

People who throw house parties can be fined €1,000 and jailed for up to a month under new proposals 20:55
Extra day to Dáil debate on extending State’s powers during pandemic 20:27
Schools should not reopen after midterm unless safety improves, say unions 19:34
School ordered to reopen after closing due to Covid-19 fears 19:30
Rescue operation under way to prevent freighter hitting rocks 19:22