Residents of estate complain about 50 tree stumps in their area 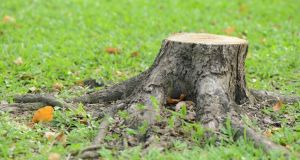 The process from removal to replanting may take up to 3-5 years because sufficient time needs to elapse to allow breakdown of residual underground root material. Photograph: Getty

A problem with South Dublin County Council’s tree stump grinder has meant that thousands of metre-high tree stumps have remained in place across the local authority area since the start of 2018.

The council said very few stumps were removed last year because of the problem with the machine but, following a tendering process for a new grinder, the 2019 tree stump removal programme is due to start this month.

The issue came to light when a councillor brought a motion to a local area committee stating “the residents of Hillcrest have asked that the 50-plus stumps of trees that are in the estate be removed and replaced with new trees”.

In its reply, council management said new trees might be planted on the site of older ones, if suitable.

“When a tree is felled by the council, it is not always possible to remove the stump at the same time. In these circumstances a short tree stump is left as a temporary measure. The stump is usually left at around 1m high so that it does not constitute a trip hazard in the intervening period,” the council said.

The council added: “Due to problems with the council’s own stump grinder and the lack of availability of a similar machine for hire, very few stumps were removed by the council during 2018. Following a tendering process to purchase a new machine an order has now been placed and delivery is expected this month, April.

“If a site where a tree was removed is suitable to support a new tree, the site may be replanted with a suitable tree species. Because the stump has to be placed on a stump removal list and sufficient time needs to elapse to allow breakdown of residual underground root material, the process from removal to replanting may take up to 3-5 years. Replacement tree planting will only take place during the dormant season.”

South Dublin County Council manages about 60,000 trees on urban streets, open spaces and parks. Its three-year rolling programme of tree maintenance for 2017-2019 is based on increased knowledge of the health and condition of trees across the county.

The council said it has renewed its commitment to tree planting with significant new and replacement tree planting carried out in 2017 and spring 2018 - more than 2,000 new trees planted.