A new chapter in Irish inshore life is about to begin

As large trawlers are restricted, ‘low-impact fishers’ take up a role in the coastal ecosystem 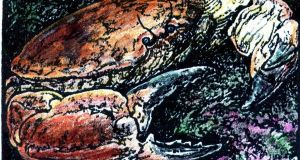 A new strategy will give the brown crab greater time for reproduction, and new, larger sizes for conservation have been proposed by fishermen

The ocean’s invisible spring begins out there beyond the umpteenth wave where the billions of diatoms are dividing. Drawing on sunlight and warmth and the phosphate stirred up by storms, they grow as phytoplankton, basic plant food for everything else in the sea.

Concentrated into plankton “fronts”, their manufactured chlorophyll then catches the light, enough for satellites in space to map dark green in place of blue. In summer, the drifts are often marked by gatherings of basking sharks at the masses of animal zooplankton feeding on the plants. Their dramatic barn-door jaws take advantage of the great flow of takeaway sustenance that swirls around the coastal islands and into the bays.

The enriched and irregular hem of the inshore ocean is a marine world of its own, rich in different habitats and sheltering hundreds of different species. It could support a steady harvest by coastal communities using small boats – the “low-impact fishers of Europe” as one group call themselves.

Decades of disillusion and mismanagement have been driving the next generation of fishermen away from a calling that many really aspire to. This spring, however, could promise a whole new chapter in Ireland’s inshore life, as local fishermen, finding an organised voice at last, join with Bord Iascaigh Mhara in directing their own future.

The native purple sea urchins, once prolific, now have to be farmed in tanks ashore

Large trawlers are finally being banned from waters inside six nautical miles (the territory reserved to Irish ownership). By next spring, the sight of offshore pair trawlers scooping inshore sprat for fishmeal, for example, should be no more.

Bord Iascaigh Mhara (BIM), the state agency for fishery development, once treated small fishermen and their world of half-deckers as a mere stepping stone to bigger offshore trawlers. But ecological and social times have changed. The new Inshore Fisheries Sector Strategy 2019-2023, published by BIM, sees the inshore sector as “in a very different space” from its last review and strategy, published 20 years ago.

Four years of consultation with the fishermen and processors through local groups and the National Inshore Fisheries Forum have, it says, allowed the sector “to take ownership of the process and the final product”.

The report expresses concern at decline and the loss of many inshore fisheries. The Forum’s chair, Trudy McIntyre from Dunmore East, has described how losing salmon, bass and eels “has put pressure on our crab and lobster fisheries” among the remaining catches. These follow the lost abundance of skate, rays and plaice and other inshore species. Even the native purple sea urchins, once prolific, now have to be farmed in tanks ashore.

Harvest of the edible or “brown” crab, with its peculiar migratory biology, has seen disastrous episodes of overfishing and conflict. But the new strategy will give the crabs greater time for reproduction, and new, larger sizes for conservation have been proposed by fishermen themselves.

Bottom trawls and dredges damage maerl beds, sea grass and reefs. Too many pots can do much the same. Large mesh tangle nets can drown harbour and grey seals

Among Ireland’s 1,900 inshore vessels, however, “taking ownership” of concern for local marine ecosystems still seems far from achievement, and conservation is still seen as something imposed from above. Key issues declared by the new strategy include the “constraints” imposed by outside rules. “The perceived complexity of the environmental legislation,” it adds,” has contributed to a lack of understanding regarding the implementation and impact on the inshore sector.”

Putting this right is complicated by the sheer diversity of inshore activity and the growing competition for space in waters used for recreation and planned for wind turbines.

The first analysis of impact on a major protected coastal site was carried out in 2013 by the Marine Institute at Roaringwater Bay in west Cork, a Special Conservation Area (SAC) for otters, porpoises and grey seals, and particular seabed habitats.

It has since looked at risks from fisheries to SACs from Carnsore Point in Co Wexford to Mulroy Bay in Co Donegal. Its generalised findings were no surprise. Bottom trawls and dredges damage maerl beds, sea grass and the reefs that are built organically. Too many pots can do much the same. Large mesh tangle nets can drown harbour and grey seals.

Populations of grey seals are increasing, and Trudy McIntyre has complained of their “untold damage to fish stocks and fishing gear”. Gillnetting, as she says, “is like a meals-on-wheels service for the seals. They swim ahead of the boats, eating their way through the catch before you get it on board.”

In that one traditional inshore issue, at least, nothing has changed. Respecting ecosystems will be a test of the “low-impact fishermen” who hopefully now inherit the waters around our shores. As the sea grows warmer, and the carbonic acid of climate change bites at the calcium structures of so many marine lives, there will be even tougher challenges to taking a sustainable harvest from the sea.