Parties divided on carbon tax ahead of committee report

‘It is beyond the means of many people to retrofit their homes,’ says Solidarity- PBP TD 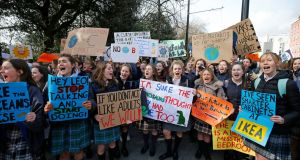 Solidarity-People Before Profit (PBP) says it supports the imposition of new taxes on carbon emissions but only for big polluters in industry and agriculture and not for individuals or low-income families.

Increasing carbon tax significantly is proposed in a draft report of the all-party Committee on Climate Action, which is due to be published on March 28th.

On taxing fossil fuels and giving revenue back to households, Ms Smith said: “Under the ‘fee and dividend’ carbon tax model, ordinary people would have to fork out money which many hard-pressed people, for example who are struggling to pay their fuel bills as it is, don’t have up front.”

It was “fantasy economics” for Green Party leader Eamon Ryan to suggest a carbon tax on ordinary people while they had no access to alternatives, with public transport subventions cut and fares becoming increasingly unaffordable, she said.

“It is beyond the means of many working and middle class people for them to retrofit their homes and to install solar panels-charging them for their use of carbon fuels is totally unfair.”

Evidence from countries like Norway and British Colombia refuted the rationale for carbon tax as a method of tackling carbon emissions, Ms Smith claimed.

Solidarity-PBP would support hitting the profits of fossil fuel companies while using the taxes raised to build new renewable energy sources and to provide “free public transport and a massive investment in rail, tram and bus”.

The Labour Party supported ringfencing and recycling of carbon tax revenue back into the economy to support retrofitting of houses and subsidising the purchase of electric cars, its spokesman on climate action Sean Sherlock said.

“We take in roughly €400 million at the current carbon tax rate. That money, if ringfenced, is a good starting point to give money back to people through grants to better insulate their houses and switch to electric cars.”

He added: “There is no point in taking money off people and giving some of it back to them if it doesn’t change behaviour. The whole point of responding to this climate emergency is that we all change behaviour. All the fee and dividend model does is to facilitate people to buy even more home heating oil if they know there is a rebate coming. It doesn’t incentivise them to insulate the house.”

Mr Sherlock said it was disingenuous of the Green Party to suggest it gave money back to poorer people. “It only gives money back to poorer people if the economic model on which it’s based assumes poorer people will insulate their homes with the dividend cheques they receive. The reality is that it works against people who don’t have the money to insulate their houses or to purchase hybrids because the capital outlay needed for upgrading houses and cars requires the taking on debt.”

That was why ringfencing carbon taxes at least created a fund where monies could be made available for householders to retrofit houses to tackle fuel poverty, and make the switch away from diesel, Mr Sherlock said.

“Sending someone a cheque for €100 a year as a dividend might even prove a disincentive to behavioural change because it could signal that one is absolved of any need to decarbonise their lives. The cheque alone becomes the signal that the citizen has done her bit for the environment,” he said.

Independent TD Michael Fitzmaurice said “drastic proposals” mooted by the committee would unfairly hit people living in rural Ireland. He claimed the main parties were “fully in favour of penalising rural dwellers”, which amounted to a “regionalisation of carbon”.

He believed the carbon measures in the draft report threatened rural dwellers and farmers, while making a theme park out of the west of Ireland. “They are talking about wetting 270,000 hectares of peatlands, beginning with 130,000ha from now until 2030.”

“The dream continues, as no one appears to have done a costing on this... While it may be workable to go onto State-owned lands, do they not remember the debacle that the State had over the last number of years with people who had turbary and fee simple rights in bogs?”