Minister under fire for approving harvesting of Bantry Bay seaweed 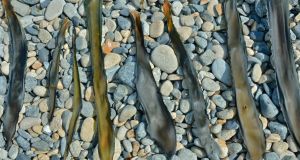 A west Cork-based environmental group has said it is “utterly disappointed” with Minister of State for Housing Damien English for failing to consult it before signing off on mechanical harvesting of seaweed in Bantry Bay.

Mr English’s decision to sanction the first approval for kelp harvesting by mechanical means will impact on kelp stocks around the coast, the Bantry Bay – Protect our Native Kelp Forest group has warned.

However, the Kerry company BioAtlantis, which has secured the licence to harvest kelp, has strongly rejected charges that any of its operations will affect the bay.

Rejecting criticism of its operations and the claims that 50 local jobs could be lost, BioAtlantis chief executive John T O’Sullivan said kelp has been mechanically harvested in France and Norway since the early 1970s.

The Tralee company extracts two key bioactive ingredients for use in animal antibiotics. It applied for a foreshore harvesting licence in 2008 in Kenmare Bay, but later switched to Bantry Bay.

The two sides disagree sharply over the project. The local campaign group collected 12,000 signatures and complain that Mr English has refused to engage with it.

It claims that mechanical harvesting may cause “irreversible damage to the ecosystem and businesses of the Bantry Bay area” and affect “50-plus” inshore fishermen who fish in the bay.

The campaign claimed that an environmental impact assessment (EIS) should have been carried out and it argues that the decision to grant a licence breaches several EU directives and the spirit of the Aarhus Convention.

Kelp forests are a nursery for juvenile fish and crustaceans, such as crab and lobster and provide spawning grounds for many species of fish, said the group. The kelp forests, it argues, form the “base of the food web in Bantry Bay”.

However, Mr O’Sullivan said crustaceans such as lobster, shrimp and crab require habitat where kelp does not grow and there is “a very low risk” that they could be affected by harvesting.

The peer reviewed literature shows that crustaceans require and occupy a range of non-kelp habitat such as soft bottom areas, shallow open water, rocky shores and mud substrate, i.e. areas where kelp does not grow, he said.

Saying the licensing is “good news” for the local economy, Mr O’Sullivan said an EIS is not required under legislation - a fact, he said, that had been confirmed by the European Commission in September.

The claim that 50 fishermen’s jobs could be lost because of BioAtlantis’ operations is “outrageous” and “false and not supported by any evidence whatsoever”, he went on.

A mower suspended from a vessel will not cut below 25cm, or 12 inches, of kelp, and will not touch the seabed, he said. A vessel is being commissioned and may begin work in the New Year.

“As primary producers, they are also critical for supporting food webs which in turn contribute to fish and shellfish productivity,” the assessment indicated.

However, BioAtlantis argues that the Scottish report also emphasised that kelp “may potentially be harvested mechanically” by using a comb-like trawl similar to that used in Norway and Iceland over the last 50 and 30 years respectively, but one that strips kelp, rather than by clear felling of the kelp.