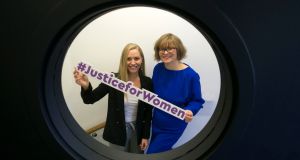 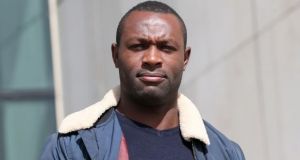 Francis Usanga was convicted of punching Emma Murphy in the face in front of her children, leaving her with a black eye. Photograph: Collins Courts

Victims of domestic violence have no faith in the court system and this prevents them from going to the Garda, according to a woman whose ex-partner avoided jail recently for beating her.

Emma Murphy, a domestic violence activist and public speaker, came to national and international attention in 2015 when she made a personal video about the abuse she suffered at the hands of her then partner Francis Usanga. The video has now been viewed over 10 million times.

Last month Usanga (31), a fitness instructor from Lanesboro in Finglas, Dublin was ordered to carry out 100 hours community service in lieu of a five month sentence. He had been convicted of punching Ms Murphy in the face in front of her children, leaving her with a black eye.

“Coming forward is the hardest part. Picking up the phone and making that phone call,” Ms Murphy said during a panel discussion on domestic violence prosecutions organised by the National Observatory on Violence against Women and the National Women’s Council.

“Victims don’t have faith in the court system and I can totally understand why. It’s a very, very long process for many reasons.

“I can completely relate to women who struggle to come forward for that reason. It’s one of the most physically and mentally draining processes anyone will have to go through,” she said.”

Ms Murphy, who is due to appear on The Late Late show on Friday night, welcomed a proposal by Rebecca Coen from the office of the Director of Public Prosecutions (DPP) for specialist domestic violence courts which could fast-track cases meaning victim’s wouldn’t have to live in fear while their case makes its way through the courts system, a process that can take years.

“It would help women massively. You read about these cases which are lasting for years. For a victim, the thoughts of even getting through the next few weeks, never mind the next few years, can be too much. This is absolutely needed in this country to speed it up.”

Ms Murphy also welcomed the “coercive control” amendments to the forthcoming Domestic Violence Bill which will see the criminalisation of psychological or other forms of non-physical abuse within a relationship.

“I was very, very happy to see that. I speak to women every single day and one thing they always ask me is how can I go into a police station and say I’m mentally or financially controlled by my partner. And you just couldn’t. So I’m very happy and very proud that this legislation is now being passed.

“I’m hoping it will encourage more women to come forward about this. With coercive control, it’s lifelong. It’s not something you can get over. It’s not a bruise that’s going to heal in a few weeks. It’s a scar that will last a lifetime.”