Another Life: Plans to ‘enhance’ breed for a sustainable role on western farmlands 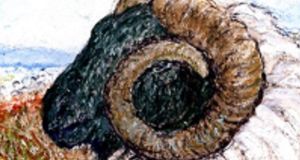 Blackface make the most of rough upland herbage, with a coarse thatch of fleece that’s proof against wind and rain. Illustration: Michael Viney

One sound from autumn has stayed with me over the years: the hollow thock...thock...thock of colliding skulls in a confrontation of rams. One animal had pushed his horns too far through the fence, so the other had merely to back off and charge again in a concatenation of thuds, like those of a fence-post being sledgehammered into the ground.

This one-off display was reminiscent of wildlife films about rutting mountain mouflon of Asia Minor, from which, some 7,000 years ago, most of our modern sheep breeds were domesticated. Our local Blackface, however, like most of those in Mayo and Connemara, trace their temperament to a more recent source in the history of Connacht’s hill sheep.

About 1850 a Scottish landowner, Capt Boswell Houston, leased some 40,000 acres of west Mayo, embracing Mweelrea Mountain along with the Sheffry and Partry hills. At Killary Harbour he brought in thousands of Blackface “hornies” from Scotland, together with Scottish shepherds. They duly extinguished the golden eagles that nested on a peak above the Houstons’ house, deep in Doolough Pass.

While they also, on the captain’s boast, marked 26,000 sheep at one shearing, they found it hard to keep track of all the rams at tupping time. Some rams found themselves guided into mating with the local people’s sheep, the small, white cladoir of the shore, nourished substantially on seaweed.

While in Scotland and Northern Ireland the Blackface evolved into strains with bigger frames or better suited to wintering indoors, the breed centred on Mayo and Connemara remains strongly distinctive. It makes the most of rough upland herbage, with a coarse thatch of fleece that’s proof against wind and rain. At a time when western hill farming is often pictured as in steady decline, its mountain slopes fit only for “rewilding”, the Blackface bloodline is being given a new and potent value.

The Mayo Blackface Sheep Group, formed in 2004 by enthusiastic hill farmers from Achill to Tourmakeady, promotes the breed as a fount of pedigree genes for crossbred sheep on Ireland’s lowland farms. Its recent sale at Ballinrobe saw more than 2,000 sheep for sale at good prices. Bred, for example, with Bluefaced Leicester rams, Blackface ewes produce the “Mayo mule”, reliably and prolifically mothering twin lambs.

Many Mayo farmers have pure-bred Blackface flocks but no records of breeding results to back up a pedigree certificate. Now, through the group, they use data systems from Teagasc, the state research body. It sees improving Blackface rams as the quickest way to boost lowland genes in their new Sheep Ireland programme.

Released from monastic paddocks, the rams have been about their calling since late October, the season’s effort costing them some 15 per cent of bodyweight. Each covers three or four ewes a day to a total of 50, sometimes more.

As a check on their activity, a colourful paste, called raddle, is smeared around their brisket (not, in this case, a cut of beef) or supplied by a crayon in a harness. This leaves its mark on the rear of the ewes. As with humans, however, the effort is not always productive (and some 15 per cent of rams are gay). The colour of the raddle is changed every couple of weeks to help weed out rams that aren’t performing.

The new potential for Blackface comes at a crucial time for the western hills. After the ecological trauma of overgrazing peatland late in the 1900s, commonage numbers were controlled and grants introduced for more nature-friendly farming.

The new problem, as Teagasc sees it, is the growing abandonment of higher and poorer land by ageing or partly employed farmers. There is some amalgamation of land, but farmers in the numerous “special areas of conservation” complain that potential restrictions cut the resale value by half.

Meanwhile, locally led agri-environment schemes, promoted by Teagasc’s Farming for Nature programme, promise hill grazing kept in some balance with upland biodiversity. The first of its aims is that “sheep can be an ecological tool”.

A scheme launched in the past year covers the mountains of the Twelve Bens and Maumturks, where past overgrazing was so severe as to blacken the bogs and extinguish rare plants on the peaks. Some 80 per cent of farmers have signed up to a results-based scheme of payments. Walking the land with advisers, they choose from grazing plans and other measures they have helped to develop and organise. Among them is clearance of rhododendron shrubs, invasive and widespread on Connemara peatland.

The Blackface breed will be “maintained and enhanced” for a hopefully “sustainable” role, perhaps alongside cattle that are kinder to some habitats. And hopefully the group will find a more sustainable title than the North Connemara Locally-Led Agri -Environmental Scheme or NCLLAES.

There was a time, after all, when Connemara farmers could have picked a good word from Irish. But I note that a website about Blackface prospects for the Galway Capital of Culture prefers to speak of “Project Baa Baa”.