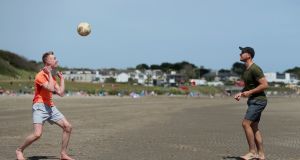 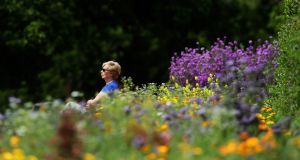 A woman sits among the flowers in the Botanic Gardens in Dublin as the good weather continues. Photograph: Brian Lawless/PA Wire 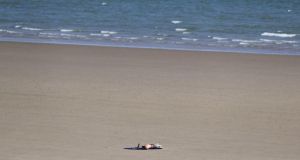 This bank holiday Monday is expected to be the hottest day of the year so far with a maximum temperature of 27 degrees Celsius forecast for Connacht and west Munster.

Met Éireann says temperatures will hit above 20 Celsius for all of the country on Monday, although it will be cloudier than previous days.

Temperatures on Sunday peaked at 26.5 degrees in Newport, Co Mayo, just below the 26.8 recorded in Mount Dillon, Co Roscommon on Saturday and Thursday, which was the highest temperature so far this year.

Irish Water has appealed to members of the public to conserve water where they can and says it is “exploring all options”, including a potential hosepipe ban, to protect water supplies as the warm, dry weather continues.

Some 15 of the national water utility’s 900 drinking water schemes have hit “drought status” with another 23 at risk of going into drought, Irish Water said on Sunday.

It warned that the increased domestic demand for water, combined with a rise in commercial demand as businesses reopen, was being exacerbated by warm weather and the growth of drought conditions.

Irish Water reiterated its appeal to not use power washers and also urged members of the public to use a watering can rather than a hose for plants, and to take a shower rather than a bath and to fix any dripping taps.

The warm bank holiday weather also brought a heightened risk of forest fires with a red fire warning in place around the country until Monday evening.

The Department of Agriculture, Food and the Marine issued the warning on Friday, saying there was an “extreme fire risk” and called on the public to take “immediate action” if a blaze breaks out.

Firefighters continued to tackle blazes in counties Sligo, Clare, Laois and Leitrim on Sunday but successfully brought a large fire, which quickly spread on Saturday in Co Kildare, under control.

More than one hundred hectares of newly planted forest were destroyed in the blaze in Clonagh, Enfield on the Kildare-Meath border with damage worth €150,000 to the area, said Pat Neville, communications manager for Coillte.

Coillte helicopters, the Irish Air Corps and units from Kildare County Council worked together on Saturday to keep the fire at the forest in Hortland away from a factory which produces explosives for mining and quarrying.

Mr Neville confirmed the fire had been brought under control but that blazes were continuing to spread in other parts of the country. He urged members of the public not to do any burning outdoors and to immediately report any blazes to the fire services.

“The conditions for fire are perfect right now – it’s dry, there’s no rain and there’s a breeze that fans the fire,” said Mr Neville. “Even a small fire can take hold very quickly, it can really get out of control and cause extreme risk to the public and a real health and safety risk for fire fighters.”

In Dublin, the Bull Wall wooden bridge was closed to cars over the bank holiday with access remaining opening for pedestrians and cyclists. Motorists who live on the island or work in a local business can also continue to use the bridge, said a tweet from An Garda Síochána.

The warm weather is set to continue into Tuesday with temperatures between 22-26 degrees in the south and the midlands. However, temperatures will start to drop into the late teens in northern counties with light patches of rain spreading into the evening.

The warm spell will come to an end on Wednesday with temperatures dropping down into the mid-teens bringing breezy, cooler conditions.