Midlands must be made green energy hub, Mulvey says 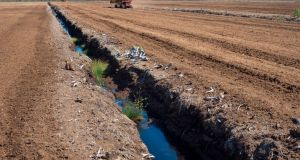 The Midlands should become a major hub for renewable energy, and act as a second location for businesses based in coastal Irish cities, according to Just Transition Commissioner Kieran Mulvey.

In his first progress report to the Government, Mr Mulvey underlines the importance of a major bog restoration programme and a centre for climate change to act as a visitor centre and chart the region’s transformation to a low-carbon economy.

The report was published on Friday following a Cabinet meeting. Mr Mulvey was appointed last November after €30 million was allocated in the budget to support the region. This followed an earlier-than-anticipated ending of peat extraction operations by Bord na Móna – with a view to saving at least 1.25 million tonnes of carbon emissions each year up to 2027.

“The Midlands must seek to position itself as a second-site location for coastal city-based businesses, and so must promote itself as a central, well-connected region with relatively lower operating costs than coastal cities. Second-site facilities must be developed throughout the region,” he suggests.

The region should also build on its “enormous and immediate opportunities” in tourism by focusing on heritage, leisure activities – centred on its extensive waterways – and ecology.

However the report highlights a risk to peat harvesting this summer that could result in a €240 million hit to horticulture and food production businesses (including private peat producers). The planning permission required for extraction under environmental regulations has not yet been granted, the report says.

“Horticultural peat would have to be replaced by import substitution at as yet an unquantified cost. The irony of replacing harvested peat from other EU countries should not be lost in these considerations,” he adds.

A large number of projects are under way with potential for job creation, but the report underlines the need for urgency; and a more streamlined approach between statutory bodies, fast-tracking of planning and funding to ensure completion.

It details the deep impact already affecting the Midlands due to Bord na Móna getting out of peat production much faster than originally anticipated and two ESB peat-burning plants in Shannonbridge and Lanesboro closing later this year.

A “whole of Midlands” approach is needed to ensure as many jobs in Bord na Móna and ESB are maintained, “in existing and new enterprises, and that new employment opportunities are created in the region”.

In engagement with workers at Bord Na Móna sites and ESB plants, “the abiding impression is of a combined workforce, though well aware of the environmental and climate-related need to bring to an end the use of fossil fuels and peat for energy purposes”, in shock from the immediacy of closure decisions “and the real and current impact upon their livelihoods”.

What was expected to be a 10-year transition period “is now reduced to 12 months, and possibly shorter”.

Minister for Climate Action Richard Bruton said he was acutely aware of the impact an early exit from peat was having on workers and their families and on the Midlands more broadly – which was compounded by Covid-19.

“Securing sustainable employment opportunities for the region and a just transition for those most severely affected must be at the heart of our response,” he said.

A detailed implementation plan will be prepared, facilitated by a working group chaired by the Department of the Taoiseach, in response to the recommendations.

Accepting the need for urgent action in key areas, he launched the first call for proposals under the €11 million Just Transition Fund including retraining workers and proposals to generate sustainable employment in green enterprise in the region.

Mr Bruton said improved governance arrangements would be put in place between all parties including the Midlands Regional Transition Team, and State agency lands and facilities identified for green energy projects.