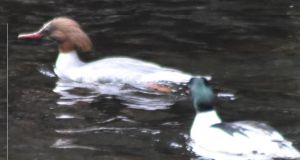 This white spider killed a bee and took up residence in a flower in my garden. There is no sign of a web.
Alan McLoughlin, Maynooth, Co Kildare

It’s the flower spider, a crab spider that doesn’t spin a web. It comes in different colours – white, light green and yellow. Many readers have asked for identification. This photo was sent by Catherine Fox.

We found this creature in a rockpool. What is it?
The Lydon children, Sutton, Dublin 13

It’s a king ragworm, which burrows in the sand and lives on the lower shore and in shallow water.

My daughter Holly (6) found this amazing looking worm emerging from the sand on the seashore between Malahide and Portmarnock. It had red bumps and was about 45cm long.
Noeleen Smyth, Swords, Co Dublin

It’s a nereid, a marine worm that belongs to the same family as the ragworm, used as bait by fishermen.

I was lucky enough to happen upon a pair of goosanders on the Avonmore river. They lie low in the water and plough the surface with their bills in search of fish.
Christy Kenneally, Rathdrum, Co Wicklow

They are holly blue butterflies, the earliest of the blues.

While I was working in my garden I had this very tame visitor that sat there as I moved around it.
Siobhan Fitzpatrick, Ruan, Co Clare

In my small garden pond I have tadpoles and what look like shrimps about 2cm.
John Suttle, Three Mile Water, Co Wicklow
They are the larvae of the great diving beetle and they will feast on your tadpoles.