Is the Great Barrier Reef too big to fail? Unfortunately not

If the oceans’ coral reefs die, it will spell disaster for much of the world’s marine life 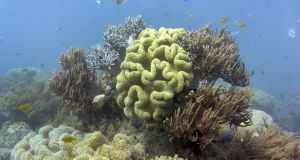 Australia’s Great Barrier Reef is best described in superlatives. Covering an area the size of Italy, it is the only living structure clearly visible from space. Rather than a single reef, the mighty Barrier Reef, which extends much of the length of Australia’s east coast, is instead an archipelago of some 3,000 co-habitating reefs.

Although covering barely one-tenth of 1 per cent of the ocean floor, globally, reefs are the nurseries for around a quarter of all marine species. Their importance to the oceans’ ecosystems vastly outweighs their physical extent.

Despite its size, the Barrier Reef is manifestly not too big to fail. Marine scientists have been ringing alarm bells as an unprecedented series of major recent “bleaching” events have left large parts of the reef system dying or dead.

This week, surveys of the reef revealed that an estimated 29 per cent of shallow-water corals had died from bleaching in 2016, mostly in the north of the reef. The figure is up from the 22 per cent estimated in mid-2016, according to surveys by Australian agencies including the country’s Institute of Marine Science.

Coral reefs are a symbiosis between tiny marine animals called polyps and a type of single-celled algae called zooxanthellae. While the polyps build the distinctive calcium carbonate external skeleton, the algae attach themselves to the coral, and, in exchange for a safe home, provide a food source for their hosts.

The countless nooks and crevasses in a coral reef system provides ideal shelter for huge numbers of marine animals to raise their young, and a healthy reef system, as depicted in the animated film Finding Nemo, is a riot of colour and activity.

A bleaching event occurs when water temperatures increase beyond a level that the heat-sensitive zooxanthellae can tolerate. This causes them to begin to break down and emit toxins. The polyps then eject them from the reef in self-defence, leaving the bare white coral skeleton, and this is what is described as a bleaching event.

No living system survives in the turbulent oceans for millennia unless they are both hardy and adaptable. Corals are undoubtedly resilient. If ocean temperatures reduce, the reefs welcome back their algal partners and co-operation resumes. As long as the damage hasn’t been too severe or protracted, a bleached reef system can be on the path to recovery within a decade.

However, reef systems adapted to bounce back from infrequent disasters driven by spikes in water temperatures are ill-equipped to cope when one bleaching event follows another in close succession.

For instance, the 20th century’s single most intense El Niño event occurred in 1998, and this largely natural phenomenon, which causes big but short-lived increases in surface water temperature, led to significant coral bleaching.

Were this a once-off, reefs such as the Great Barrier would undoubtedly be able to remain cool and carry on. The relentless rise in ocean surface temperatures as a result of global warming has completely changed the equation.

More massive bleaching events struck in 2002 and 2006, followed by the latest series of catastrophic bleaching events, from December 2015. The return of the El Niño compounded the problem, but it was the underlying warming pulse that did the real damage.

If international action to rapidly and permanently slash greenhouse gas emissions is not successful, the world’s reef systems are doomed

Some recent media reports have prematurely pronounced the Great Barrier Reef as already dead. Along the Barrier Reef, the northern end has been the most severely impacted, with over 80 per cent bleached and 26-67 per cent dead. Further south, the damage has been less severe.

The International Society for Reef Studies, which represents coral reef scientists and managers, has warned that if average global surface temperatures increase by 2°C or more, the resultant ocean warming, along with acidification, “will lead to continued widespread destruction of coral reef ecosystems over the next few decades”.

In other words, if international action to rapidly and permanently slash greenhouse gas emissions is not successful, the world’s reef systems are doomed, and with them goes much of life in the ocean.

Leaving aside the fathomless tragedy of losing some of the world’s richest ecosystems in just the next couple of decades, for those unmoved by the death of the oceans, there are also staggering economic losses to contemplate.

The Australian Climate Council in a 2015 report calculated the value of the world’s reef systems at more than $1 trillion. The report found that globally, the livelihoods of some 500 million people were largely dependent on healthy reef systems.

The Great Barrier Reef is one of Australia’s biggest tourist draws, contributing over $1 billion in revenues annually. No one is going to pay to visit a bleached, lifeless reef.

Another major function of healthy reefs is as a storm buffer for coastal regions, sheltering them from the worst impacts of tropical storms. Strip the coral away, and many more storms are going to make landfall in newly-exposed coastal regions.

Three-quarters of the world’s reef systems are now officially classified as threatened. Apart from warming waters, overfishing, careless tourism and pollution, ocean water acidification as a result of rising carbon dioxide levels is impeding the ability of marine creatures including polyps to make shells. Sick reefs are also more prone to invasive species, such as the deadly crown-of-thorns starfish.

While you would normally associate coral reefs with the turquoise waters of the Caribbean or Australia, Ireland too has its share of coldwater coral reefs. These were first identified by UCC scientists just two years ago some 300km off the coast of Kerry on the Porcupine Bank canyon. Even though these unusual corals were located at a depth of up to 900 metres, the survey team also found discarded fishing gear and litter in this remote, ostensibly pristine, abyss.

The window for global action to save our critical reef systems is closing fast. If we continue on our current path of the uncontrolled dumping of some 40 billion tonnes of greenhouse gases into the global atmosphere every year, climate scientists believe the point of no return for the Great Barrier Reef is almost upon us.

John Gibbons is an environmental writer and commentator. ThinkOrSwim.ie @think_or_swim