President ready to pull out of landmark deal to cut global carbon emissions, says US media 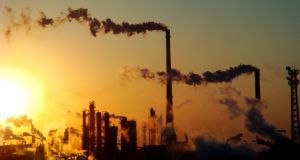 Smokes billows out of chimneys at a chemical plant in north China’s Tianjin municipality. Donald Trump tweeted on Wednesday that he would reach a final decision on the Paris agreement in a few days, shortly after a wave of reports said he was about to exit from the deal. Photograph: Ryan Tong/EPA

Donald Trump is poised to withdraw from the Paris climate accord, according to multiple reports on Wednesday, in a move that would profoundly undermine the landmark agreement by nearly 200 nations to curtail global warming.

The US president tweeted on Wednesday that he would reach a final decision in a few days, shortly after a wave of reports said he was about to exit from the deal. The reports follow his refusal to express support for global efforts to combat climate change at a G7 summit with European leaders last week.

Should the US exit from the Paris agreement, which was negotiated and ratified under Barack Obama, the country would join only Syria and Nicaragua as non-participants. The US had previously committed to a goal of reducing carbon emissions by 26 per cent to 28 per cent by 2025.

The Trump administration has been divided on the issue, with Environmental Protection Agency chief Scott Pruitt and Trump adviser Steve Bannon among the conservative hardliners who have been in favour of a US exit from the deal.

Axios, which first reported on Mr Trump’s intention to rip up the deal , said the details were being ironed out by a team led by Mr Pruitt.

I will be announcing my decision on the Paris Accord over the next few days. MAKE AMERICA GREAT AGAIN!

Mr Trump has dubbed climate change a hoax, and once tweeted that global warming was a concept “created by and for the Chinese in order to make US manufacturing non-competitive”. The US president nonetheless faced immense pressure during his first foreign trip since taking office to uphold the pact from both world leaders and Pope Francis, who gave Mr Trump his papal encyclical on climate change during their meeting at the Vatican.

But the efforts to persuade Trump were “very unsatisfactory”, according to German chancellor Angela Merkel, who observed: “Here we have the situation that six members, or even seven if you want to add the EU, stand against one.”

The US ranks as the world’s second-largest carbon polluter, and initial estimates by universities and think tanks suggest its withdrawal would add up to 3 billion tonnes of extra carbon dioxide to the atmosphere each year, raising the global temperature by 0.1C to 0.3C by the end of the century.

Environmentalists also fear the ripple effect that Mr Trump’s decision might have on other major polluters, such as China and India, who have reiterated their commitment to the accord but could be emboldened to walk away in the face of similar action by the US.

Secretary of state Rex Tillerson has urged the US to remain in the accord, which is backed by a majority of the American public. And while other countries have vowed to press on, with or without the US, its absence would leave the enforcement of the deal in a flux.

The consequences would be especially profound for coastal cities facing rising sea levels, the protection of endangered species, and areas around the world already suffering from heatwaves and food insecurity.

Mr Trump has already taken action in recent months to weaken the environmental legacy of the Obama administration by paving the way to overturn rules to curb greenhouse gas emissions and protect American waterways clean from pollution. During the presidential campaign, Mr Trump pledged to “cancel” the Paris accord within his first 100 days of office.