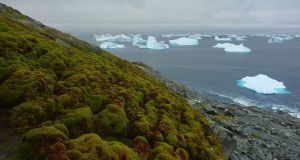 Icebergs at Green Island. A report has found that governments may be forced to deliver on their climate commitments through litigation. File photograph: Matt Amesbury/University of Exeter/PA Wire

Governments across the world may be forced to deliver on their commitments to address climate change through litigation, according to a UN study that has found a mushrooming of climate change cases.

The review, titled The Status of Climate Change Litigation, was completed by UN Environment and Columbia Law School’s Sabin Centre for Climate Change Law in New York, US.

The study confirms that the number of cases filed seeking to hold governments to account for climate-related commitments has tripled since 2014.

In the US, where president Donald Trump is threatening of pull-out of the Paris Agreement on climate change, there are 654 climate change litigation cases in train; three times more than in the rest of the world combined.

Mr Trump has said he will indicate if he is withdrawing the US from the agreement, which was concluded by nearly 200 countries in December 2015, after the G7 leaders’ summit in Italy this weekend.

The review also predicts that a lot of cases will be initiated in the future by developing countries that make up the Global South, as they look to the law to address the growing threat of climate change.

The report finds that many of the litigation cases are brought by NGOs and citizens.

However, Erik Solheim, head of UN Environment, said: “It’s not just coalitions of non-government organisations and citizens – as seen in recent European cases outlined in the report – that are using the courts in efforts to overturn government decisions seen to exacerbate climate change.”

The report describes how, in September 2015, a Pakistani lawyer’s case against Pakistan’s government for failure to carry out its 2012 National Climate Change Policy resulted in action to implement the framework and the creation of a climate change commission to monitor the government’s progress.

“It’s patently clear we need more concrete action on climate change, including addressing the root causes and helping communities adapt to the consequences. The science can stand up in a court of law, and governments need to make sure their responses to the problem do too,” Mr Solheim added.

Some 177 countries recognise the right of citizens to a clean and healthy environment, and courts are increasingly being asked to define this right in the age of climate change.

With some exceptions, the report finds governments are almost always the defendants in climate change cases.

“Judicial decisions around the world show that many courts have the authority, and the willingness, to hold governments to account for climate change,” said Michael Burger, executive director of the Sabin Centre.

“In the US, climate change litigation has been absolutely essential, from the first lawsuit demanding the US Environmental Protection Agency regulate greenhouse gas emissions, to a recent lawsuit claiming a constitutional right to a stable climate system,” he added.

The report identifies several emerging trends, including an expected rise in the number of “climate refugees” and in the number of human rights cases as a direct result of migration, resettlement, disaster recovery, access to resources and shifting populations.

By 2050, climate change could, according to some estimates, displace up to 1 billion people. That number could soar even higher later in the century if global warming is not kept under 2 degrees Celsius.

The report’s findings make it clear that a reliance on technology and non-climate policy initiatives is not sufficient to deal with the threat from climate change.

Climate laws and policies, the report finds, are a critical part of any strategy to deal with the threat from climate change.

It says that, as a result of the Paris Agreement, people, companies and non-governmental organisations can now argue in some jurisdictions that their governments must take concrete measures to mitigate climate change.

This is because the Paris Agreement puts national laws and policies into a global context and thereby enables litigants to construe governments’ commitments and actions as being adequate or inadequate.

As climate change litigation has grown, it has addressed a widening scope of activities, ranging from coastal development and infrastructure planning to resource extraction, and it is growing in ambition and effectiveness, the report concludes.