High tech flood detectors to be deployed in Dublin 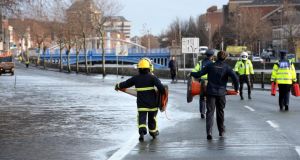 Flooding in Dublin: firefighters and gardaí block off a submerged part of Wolfe Tone Quay in 2014. Photograph: Brenda Fitzsimons

Early-warning flood detectors are to be deployed throughout Dublin to help local authorities and residents prepare for severe weather.

Wireless sensors will be installed across the capital and the surrounding county to monitor rainfall, other weather conditions and river levels. The rain detectors will allow council flood-management teams to analyse water levels and prepare for potential flooding.

“Flood damage to the city infrastructure ranges from €2 million to €100 million per annum currently, with an average of around €8 million per annum,” said Gerard O’Connell of Dublin City Council’s flood-advisory office. “This figure is increasing due to sea-level rises and more intense rainfall.”

Smart Dublin, a programme run by the capital’s four local authorities, is investing €100,000 in the project, which will be matched by Science Foundation Ireland. The project is being undertaken by Smart Dublin and the foundation’s Connect research centre, at Trinity College Dublin, in partnership with Intel.

Smart Dublin’s programme manager, Jamie Cudden, said the sensors cost only 10 or 20 per cent as much as traditional flood detectors and have a much longer battery life.

The sensors are being tested at Ballymun Library; the Bannow Road drainage depot, in Cabra; the storm-overflow tank in Clontarf; and the University College Dublin campus, at Belfield. They will be introduced to more locations over the next six months.