Bloom 2017 Super Garden winner Des Kingston has combined industrial, agricultural and historical influences to create a garden that evokes "the Ireland of our childhood". 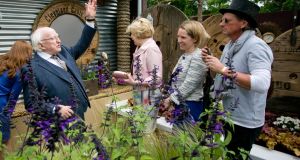 At the Bloom festival President Michael D Higgins – while not naming the US president by name – appeared to deliver a rebuke to Donald Trump’s views that climate change is a “hoax”. Photograph: PA

President Michael D Higgins has criticised world leaders who reject climate change and the findings of science and has urged the importance of every citizen “doing their bit” for sustainability.

In a speech for which he was loudly cheered and applauded at the Bloom festival in Dublin, Mr Higgins – while not naming the US president by name – appeared to deliver a rebuke to Donald Trump’s views that climate change is a “hoax”.

“I know what’s encouraging,” said Mr Higgins. “Even if some of the most powerful people in the world deny climate change or resile from climate change isn’t it marvellous that the people of the planet are saying ‘we are going to do something’.”

Speaking to reporters afterwards, he added: “Even if those who should know better in some of the most powerful positions in the world feel that they can run in a populist way away from the findings of science well the public aren’t, and the citizens who are concerned – wherever they are on our planet – are going to support making a response to climate change. It’s important that I, as head of State, add my voice to that as well.” 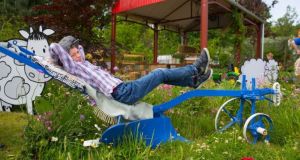 The President and his wife, Sabina Higgins, spent several hours visiting the show gardens and exhibitors.

A show garden inspired by the rugged Connemara Coast won the main award at this year’s festival. The garden, designed by Oliver and Liat Schurmann of Mount Venus Nursery in Dublin, features a water landscape with a dramatic tidal effect. The husband and wife team have won seven Bloom awards previously.

Previous Bloom-medal and Super Garden winner Leonie Cornelius received the overall Small Garden award for the Everyone Has a Dream garden. This garden aims to show how, through careful design and creative thinking, we can build the garden of our dreams on a small scale.