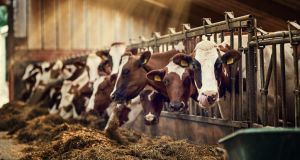 The report highlighted how images of farming and agriculture were rarely linked to climate change, despite being one of the largest sources of emissions in Ireland. Photograph: Getty Images

The overall coverage by Irish media of climate change is low by European standards and generally reported in terms of politics and personalities, a new study has found.

Research funded by the Environmental Protection Agency said climate science was generally not contested to any great extent in reporting by Irish media.

However, an analysis of coverage of climate change by Irish media carried out by researchers at Dublin City University said the focus of the topic was generally not about climate change per se.

“Climate change is predominately framed as a political or ideological game, emphasising the personalities or parties involved, rather than the extent of the challenge,” the report stated.

It added: “The opportunity frame, which portrays responses to climate change as opportunities for positive change, is weakly represented.”

The analysis found 24 per cent of articles in national newspapers on climate change were framed by a political or ideological “contest between actors” with an emphasis on “winners and losers”.

However, it acknowledged that the reports largely accept the reality of climate change.

It found coverage of “contested science” was largely confined to a small number of regular columnists who adopted contrarian views.

Overall climate change accounted for between 2 per cent and 4 per cent of all news in main national titles.

Of those just under 7 per cent portrayed climate change as offering a chance for positive change, while almost 6 per cent related to “contested science”.

Over 14 per cent of articles on climate change presented it as real and requiring urgent action.

The report noted that research indicated that public concern about climate change was largely derived from media consumption.

The analysis indicated The Irish Times afforded the issue the greatest volume of coverage among national newspapers.

Overall, it found there was a dearth of images linking climate change to topical news stories such as flooding and economic recovery.

It highlighted how images of farming and agriculture were rarely linked to climate change, despite being one of the largest sources of CO2 and non-CO2 emissions in Ireland.

The report said publicly funded broadcasters like RTÉ appeared ideally placed to communicate climate change to the public especially given the constraints which faced many commercial media companies across Europe.

However, it said climate change was “largely an invisible issue” on RTÉ prior to 2000 and “broad fluctuations” in subsequent years in terms of the volume of coverage including a significant fall following the financial crisis which did not recover until the build-up to the UN Conference of the Parties in 2015.

“Much like newspaper coverage, the national broadcaster does not appear to follow a specific editorial climate change agenda, although some individual journalists do appear to focus attention on climate change from time to time,” it observed.

In terms of social media, the report found coverage was led by distinct influential groups including the mainstream media and environmental NGOs.

It also said the presence of citizen-led and organised scepticism was also notable and it found a high volume of content linking to the US-based Heartland Institute which the report said indicated the capacity of “fake news” and misinformation to infiltrate online platforms.

The study recognised that covering climate change presented a challenge to the norms, routines and formats of news production which typically value stories that are “novel and immediate”.

Coverage of environmental topics generally tended to concentrate on the local or national level such as reporting on major flooding events, rather than the wider climate change context.

The report found the general pattern of coverage of the issue by Irish newspapers broadly followed international trends by peaking during international climate change conferences and extreme weather events and falling when it was overtaken by other pressing political and economic stories dominating the news agenda.