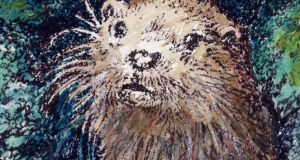 Waking on so many days to human distress in droughts, fires, floods and storms, sometimes it’s hard to find proper concern for the rest of the natural world. Even ecologists must find themselves torn between familiar programmes of conservation and the looming turmoil of climate change.

Take Cork, city of past and future floods and much citizen apprehension. It happens to host a remarkable number of urban otters. Even as I write, new pictures arrive of otter and cubs fishing in the city-centre Lee. Care for them has to be urged, even to planning their safety as the new torrents gush off the land.

Living beside a hill-stream and its passage beneath a stone bridge has given me many small, but sometimes dramatic experiences of flash flooding. A cannonade of colliding rocks and the unaccustomed roar of water has had me wondering what life could be left in place after its pell-mell passage to the sea.

The species of short, spate streams and rivers are accustomed to replenishment, or cling as larvae to the underside of rocks. But magnify events to extreme floods of rivers, and their toll extends even to aquatic mammals, forcing adult otters out to die on busy roads and sweeping their youngest cubs away.

Even in the 18th century, Ireland’s first hunting writer, Arthur Stringer, could observe: “When a flood catcheth the young, I do believe that not one in ten get out of the nest undrowned.” More otters died this way, he thought, than were ever killed for sport.

Co Cork’s rivers, as it happens, saw Ireland’s last packs of otter hounds. But today the young activists of the Cork Nature Network are trained in citizen science with new and wider significance. Half the world’s people are already crowded into cities, a good many of which are built beside rivers, so the fashioning of urban waterways and the life of their ecosystems takes on a new urgency. University College Cork, uniquely surrounded by urban otters, is now a leading centre for their study, led by mammalogist Dr Paddy Sleeman.

UCC’s main campus and satellite centres span most of the otters’ riparian corridor through the city. An intensive search in 2017, using a boat and wading river shallows along the banksides, found 31 signs of otters, including three holts (dens), along with active tracks, slides and sprainting sites.

Spraint is an otter’s dropping, made acceptably aromatic by traces of its musk, and it yields distinctive DNA. This has served to identify 11 of the otters, and camera traps at the sprainting sites supply matching photographs.

Eight of the otters live in the Blackpool suburb, where construction of a big shopping centre included an underpass channelling the narrow, often leafy river Bride, a tributary of the Lee. The underpass has a wide, raised ledge as a path for the otters, and Paddy Sleeman credits this with helping to sustain their exceptional urban population.

However, proposals to culvert long stretches of the Bride in an OPW flood protection plan face strong resistance. A ledge in an underpass is one thing; a long, dark, lifeless tunnel quite another.

The otter, Lutra lutra, is now the symbolic animal used by the Intergovernmental Science-Policy Platform on Biodiversity and Ecosystem Services (IPBES). As the top predator of European rivers, otters rule their ecosystems. While most of their food at Cork is fish and crabs, it also eats brown rats and limits the local urban mink population.

In last week’s Eye on Nature, a reader told of an encounter with an otter and her cubs resting on steps beside the Liffey’s Loopline Bridge in Dublin. Even to be hissed at was a privilege, given the rarity of such sightings.

The Liffey was one of 14 rivers and streams within the capital’s boundaries inspected for signs of otters in a baseline survey for Dublin City Council’s biodiversity planning. The signs were mainly spraint, and almost 200 were recorded over a year along some 80km of watercourses and about half that of the city’s coastal fringes. Many of 25 holts showed recent activity, and six of them were on the Dodder, the most productive river of all, especially in its more natural and less-disturbed upper reaches.

Much of the city-centre stretch of the Liffey, with its bare stone walling, gives otters little space for a rest, never mind a private spraint, so its actual use by otters remains unclear. A single holt, remarkably, was found in the quay wall at the floating restaurant, the MV Cill Airne, where an accessible floating platform was heavily marked with spraint.

There was more on the numerous steps of the Grand Canal Harbour and at the mouth of the Liffey to the Poolbeg lighthouse and beyond, where fish, fresh salty water and fewer people still make up inviting and safe habitats for Ireland’s most charismatic urban animal.