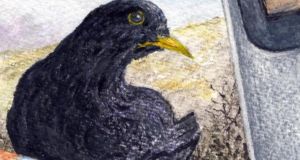 The innocence of early writing about Irish nature gave way to centuries of dramatic change, from druidic worship of the ancient forest to modern, ecological passion and alarm. Picture: Michael Viney

For the cock blackbird that visits my windowsill, with a sharp glance past my computer, our leafy acre offers shelter on a windswept, tightly nibbled hillside. His ancestors were shy birds of a densely forested island, their visits inspiring early monks to scratch happy verses on vellum: “The blackbird sings a loud strain ,/ To him the live wood is a heritage ...”

The monk called Kevin, who stuck his arm out of his cell window and may or may not have kept it there until a blackbird laid eggs on his hand, is remembered today by poets such as Seamus Heaney and Sean Lysaght. But the innocence of early writing about Irish nature gave way to centuries of dramatic change, from druidic worship of the ancient forest to modern, ecological passion and alarm.

Time has shaped a distinctive history of Irish nature literature in a deeply gathered, insightful anthology, Woven Shades of Green, by Prof Tim Wenzell of Virginia Union University and published by Bucknell University Press. Itself a generous treasury of Irish nature poetry and prose, the book is ordered by historical responses to religion, romanticism, colonisation, catastrophe, nationalism and material success.

Many powerful forces worked to shape attitudes in the intervening years

As forests gave way to farmland, it was not surprising to find that the Irish peasantry “viewed nature as an affront in their struggle for survival”, Wenzell writes. But even in the 20th century, “a burgeoning part of the Irish population began to recognise nature as enemy, or at the very least, the people began to see the natural world not only as a threat but also as an unnecessary threat ... to a comfortable and more materialistic lifestyle”.

Many powerful forces worked to shape attitudes in the intervening years. A trenchant foreword comes from John Wilson Foster, senior editor of the heavyweight Nature in Ireland: A Scientific and Cultural History (1997). “The Irish understanding of nature,” he writes, “was constrained and directed for the faithful by the Roman Catholic church. Biology, practised mostly by Protestants, was seen as a threat ...”

Foster could have elaborated on this. A stranger seen roaming the land in the 19th century, pausing to stoop to a flower, lift binoculars or swipe a net at a butterfly was very probably a Protestant wanderer from the Big House, or even the local rector. In modern times, writes Foster, Seamus Heaney “thought [Robert Lloyd] Praeger’s relationship to nature lacked a necessary native dimension.” (Praeger, the Belfast-born naturalist, was a blow-in of Dutch parentage.)

Among the many passages of prose Wenzell offers – often in contemporary description of landscape and society– is the whole of John Tyndall’s formidable “Belfast Address” to the British Association for the Advancement of Science in 1874. Tyndall, the great Irish physicist and naturalist (he was first to spot a climate problem with CO2) concluded with an outright endorsement of Darwin and the new theory of evolution. He argued for the superior authority of science over religious explanations.

The Irish Literary Revival brought 'profound emotional connection through a merging of mythology, nature and poetry'

Such confrontation came, as Wenzell says, in the period of “deep disconnection between the Irish and the natural world” that followed the Famine (itself, he might have added, an apparent betrayal of trust in nature). For the rural population, it also followed “removal from their Celtic past and a separation from an ancient language and a culture woven into both natural and supernatural realms”. With the loss of Irish went the everyday names of plants and birds that connected communities with the natural world around them.

The Irish Literary Revival, on the other hand, brought “profound emotional connection through a merging of mythology, nature and poetry”, and Wenzell allows Yeats his fairy worlds along with the swans and squirrels of Coole.

Among the scores of poems that enrich Woven Shades of Green, those of modern Ireland are, suggests Wenzell, often reacting to social change in which the natural world, while often seen as beautiful and a way to connect spiritually with God, has become “too difficult a burden on the human condition” .

Today’s poets are “travellers who return from nature, renewed by what they have found there”. Their approach is often that of naturalists, such as Michael Longley and Sean Lysaght, examining the nuances of species and environment more meticulously than their predecessors. Seamus Heaney and Patrick Kavanagh speak rather from roots in rural experience.

The book closes with excerpts from modern nature writing, in which I am abashed to find excerpts from my own nudged between those of Praeger, traversing Ireland “from end to end and sea to sea” and Tim Robinson’s exquisite explorations of Connemara.

When Praeger went on his way across the island, Connemara was still a region of “wide, treeless, houseless undulations”. Today, Wenzell himself can regret change on “the famously scenic road between Galway and Connemara, where the natural world is being wiped out through villages merging together like strip malls . . .”